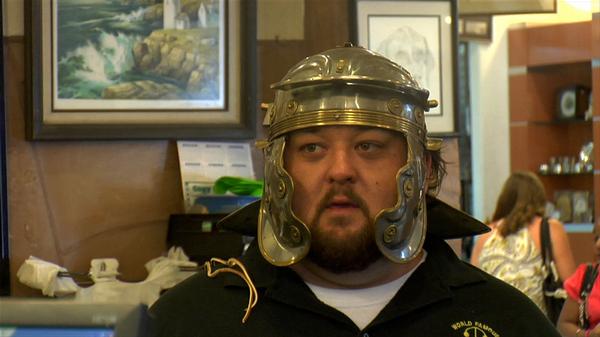 For a website dedicated to the concept of “historiography for the masses,” perhaps it was only a matter of time before the contemporary History Channel would be addressed. Once maligned for its excessive focus on World War II and military history, the History Channel of the past nonetheless remained fairly dedicated to its core concept. Historical documentaries, such as the Engineering an Empire series, The Crusades: Crescent and the Cross, The American Revolution, and Ancient Rome: Story of an Empire, tackled serious historical topics with sophistication and insight. However, following the tried and true model of channels like MTV and VH1, with their respective series the Jersey Shore and Flavor of Love, the History Channel ultimately chose in the last few years to forsake its original concept in favor of guaranteed higher ratings by dedicating almost its entire broadcast lineup to reality television. Of the seeming endless parade of reality shows that have been released by the History Channel, Pawn Stars (and its rural counterpart Cajun Pawn Stars), American Restoration, and American Pickers have by far become the most popular and well received among national audiences. This article attempts to offer a serious historical critique of what has become an increasingly ahistorical channel.

In numerous ways there is a great deal redeeming about these three shows. First, the History Channel has not strayed nearly as far from its founding ethos as numerous other channels (or at least these shows haven’t—the same cannot be said for the monstrosities Ancient Aliens and Ice Road Truckers). While one would be hard pressed to find a single music video on either MTV or VH1, all three of the History Channel’s main shows frame themselves as telling the story of American history through material culture. Pawn Stars, which is set in a Las Vegas pawnshop, centers on the co-owners Richard “Old Man” Harrison and his son Rick Harrison. Rick’s son Corey and his best friend “Chumlee” serve as supporting cast. In each episode cash-seeking patrons visit the shop with their historical curios, looking to make a buck by selling valuable historical objects to the pawnshop owners. Each object is dissected, and often authenticated (or not) by local experts, with a detailed explanation provided of the items’ place within the larger context of American history. In a typical exchange, a desired price is initially quoted by the seller, only to be dramatically talked down by the various pawnshop employees, and finally haggled to an acceptable price.

American Restoration focuses on Rick’s Restoration, a Las Vegas shop owned by Rick Dale, where patrons bring in a wide variety of objects, including toys, arcade games, cars, and perhaps most popularly, old-fashioned Coca-Cola dispensers, to be restored to mint condition. In assessing how much the item will cost to restore, Rick, much like his pawnshop compatriots, tells the story of the particular item and its importance to American history. Rusted, rotted, and tarnished old junk is taken into the shop only to be returned at the end of each episode to its owner as a shiny, sparkling, and seemingly straight off the assembly line collector’s item. American Restoration casts itself primary as the “working man’s show,” with a sleeveless, denim shirted Rick proclaiming before every show, “Remember back in the day when things were made by hand, and people took pride in their work? My Name’s Rick Dale, and I bring these things back to life.” In this respect, the show genuinely seems to relish in its blue-collar mystique, speaking to both a producerist ideology that is as old as America itself, but also in a more contemporary manner to a post-industrial economy dominated by the knowledge, finance, and service sectors, where few “true men” make their living by working with their hands or producing actual material goods.

Of all three shows, in my estimation at least, American Pickers is by far the most entertaining to watch and overtly dedicated to the concept of recreating American history through material culture. The show centers on the main characters Mike Wolf and Frank Fritz, who travel around in their van to barns, old houses, local museums, and pretty much anywhere that rusted junk can be found, looking to purchase antique items which can then be resold later in their store. Complemented by their sultry sidekick Danielle, who works from the pair’s shop Antique Archaeology, Wolf and Fritz explain at the beginning of every episode that they are “pickers” who “travel the back roads of America looking for rusty gold….We make a living telling the story of America…one piece at a time.” And indeed, within the structure of the show, they do. Each episode the pair follows leads supplied to them by Danielle, which take them to locales in either their native Iowa or throughout the nation. Whether rooting through someone’s toy collection in a garage; looking for antique movie posters located in an abandoned museum; or searching out early gas pumps or oil company signs from collectors looking to pare down their holdings, the duo explains each item’s historical significance, along with its contemporary rarity or abundance. Regardless of the item’s importance though, the ritual remains the same. Mike and Frank confer either publicly or privately, but always before the camera, regarding their assessment of a particular item’s value. This is then followed by the negotiation over price with the seller, inevitably resulting (and a few rare times not) in an agreed upon price, at which point the item is schlepped into the back of their van and hauled away. At times the show is genuinely touching. Seeing owners part with valued objects from their childhood, or selling prized family heirlooms in the wake of a member’s death often lays bare the very real feelings that individuals maintain for unique, or even more often, mass produced objects.

In several real respects it is not just the items displayed, but also the characters and settings, including the actual cast and the individuals who they come into contact with, that give the viewer a very real sense of Americana. Whether in the sweltering heat of the Las Vegas desert or the vast cornfields of Iowa, all three shows capture subcultures of collectors, traders, and hoarders of important historical artifacts.

Nonetheless, there is a very real and poignant critique to be made of the collective ethos that underlines all three shows. The predominant theme for each series is not history, but capitalism. Each show revolves primarily around markets and commodities. Market relations, both real and implied, are ubiquitous throughout these shows. Every time the “Pickers” Frank and Mike purchase a rusty bike frame dug out the back of a garage they are simultaneously creating a market for said product by offering its owner a price, while also implying the existence of a secondary market (though the audience never witnesses this stage except in advertisements to go online and purchase goods from Antique Archaeology’s stock) in which the item will later be sold for a profit. In Pawn Stars the relationship is more overt, since the proprietors will often highlight the unique market economies, such as sales auctions and specialty buyers, that will have to engage in order to sell an item at “retail value;” an argument that always results in a lower offer than the seller had initially quoted. American Restoration often captures the other end of these market relations, showing the upper-middle class and wealthy buyers who purchase historical relics so that they can be restored to their former glory and achieve the status of “collectors item.” One crossover episode displayed the unification of these processes in brutal transparency when the Pickers unearthed a rare car on assignment from the pawnshop owners (a birthday gift for Richard “Old Man” from his son and business partner Rick). After negotiating the price, the car was was then handed over by the Pawn Stars to Rick Dale for final restoration.

The other predominant process at play in these shows is that of commodification. No matter how authentic or unique the historical item excavated or displayed, there is ultimately always a price that can be set on its purchase, exchange, or restoration. Each show espouses a free market mentality where the only true value that any item has, no matter how much the sellers may suggest otherwise with their overt expressions of emotion, is that at which it can be bought, sold, or even resold. These shows serve as such perfect examples of how objects with no inherent value become commodified and fetishized that they could serve as tutorials for Marx’s Das Kapital.

In choosing to pursue ratings over actual historical content, the History Channel has made a very real statement through this reality show lineup. Ultimately, while history may be interesting, it is markets and commodities that audiences really want to see. Perhaps we are fooling ourselves to believe that historical documentaries produced for public consumption and commercial display were ever anything different. But there seems to be a firm line between history that is presented in a commercial format, and that which we are offered in American Pickers, American Restoration, and Pawn Stars. That is,markets, commodities, and the process of commodification serving as a substitute for actual history. Sadly, this is a line the History Channel has crossed, and is unlikely to go back.