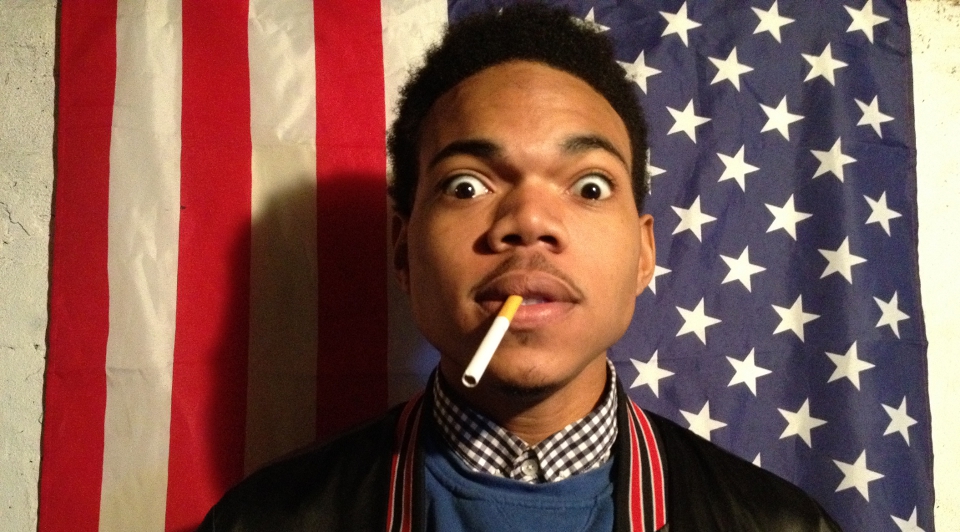 Good God this summer’s been hot! Anyone living in the Midwest, Northeast, Mid-Atlantic, or Southeast knows the debilitating feeling of walking out the door to work at 8:30 A.M. only to be slapped around by 90% humidity and taunted by temperatures that rival blast furnaces at full capacity.   Despite the considerable heat produced by the weather alone, this summer’s been scalding in emotional ways.  Violence in Chicago – where over one weekend gun violence felled 21 people, five fatally – and the Trayvon Martin – George Zimmerman court ruling seemed to have raised emotions to their boiling points. The sweat on our collective brows joined by a cauldron of resentment and mistrust.  Undoubtedly, the nation needs physical and spiritual healing, an acid trip to the center of our national soul as it were.

“What’s better than trippin than fallin in love? What’s better than Letterman, Leno, Fallen and all of the above?,” asks Chicago’s Chance the Rapper on the track “Interlude” off his new mixtape Acid Rap.  On Acid Rap, Chance captures the exuberance of adolescent summers: “Then we got out a Dodge, like them Dukes of Hazzard/Music and tabs of Lucy,/take your chance with this rapper,” but also the paralyzing fear that the year’s hottest months create in Chicago’s inner city hoods.

Released months before the depressing Zimmerman-Martin ruling, Chance put forth a mixtape that represents the giddy high of summertime in one of America’s greatest cities and the sadness that resides in its tougher corners. Not that Chance didn’t have Martin on his radar: “She like when I rap raps/But better when I sing songs/No Drake, but I get my Trey on. Killin’ in the hood like Trayvon,” he raps on the aforementioned “Interlude.”

Like most kids, Chance celebrates smoking weed, hooking up, riding around in his “whip” (car), and, surprisingly unusual for the rap game, dosing. “Raps just make me anxious and acid made me crazy/Them squares just made me looser/and that wax just made me lazy.” One could argue the last couple of weeks have been little more than a bad trip; the repeating tic of horror e.g. the division over the ruling and the media’s tendency to favor screaming matches over nuanced discussion played on repeat for the past ten days.

Chance refuses to play down the terror that South Side neighborhoods have endured in recent years—last year Chicago homicides outpaced American casualties in Afghanistan—but also resists negative fatalism. “But I knew it was fly when I was just a caterpillar/That I’d make it even if I never make a milla,/When I meet my maker he gon’ make sure that we chillin’,” he rhymes.  He’s not sure about faith (“I still be asking God to show his face”) and pacifism (“If you touch my brother that anti-violence shit goes out the window”), but he knows he’s got worth (“I was never fake, just too good to be true”). Unlike the increasingly redundant and idiotic Lil’ Wayne, who recently jabbed Frank Ocean in “Turn on the Lights” when he let go of this line, “I ain’t got no worries/No Frank Ocean I’m straight,” Chance sees no need to denigrate others to get ahead.  Between this and the excrement of his Emmet Till reference earlier this year, time to hang it up Wayne, the youngin’s are lapping you.  In fact, Chance openly touts the new face of R and B when he exuberantly claims to be “Frank Ocean listening.”

The strength of the record lay in Chance’s ability chart his journey in a way that encompasses a broad swath of the human existence.  “There is no ideology or orthodoxy. No arbitrary binaries between conscious or gangster, apostle or agnostic,” Pitchfork’s Jeff Weiss recently noted. “Freaks and free thinkers are accepted. Chance understands that those who are frightening are often frightened, too.”

Yet, a rightful anger surfaces. “Where the fuck is Matt Lauer at? Somebody get Katie Couric in here,” he demands on one of the tape’s more epic tracks, “PushaMan/Paranoia.” “They merking kids, they murder kids here/Why you think they don’t talk about it? They deserted us here.” The nuance and dark humor embedded in Acid Rap reminds this writer of the Wire, in particular, seasons one and four.  More than any show on television, the Wire depicted inner city black youth as people. They struggled with fear, insecurity, and disappointment. Think back to season one when Bodie (J.D. Williams) is ordered to kill Wallace but can’t bring himself to do it.  He screams, he insults Wallace, he bitches him out, but in the end Poot (Tray Chaney) pops Wallace (Michael B. Wallace) just when we expect Bodie too.  Poot performs a mercy killing, for both Wallace and Bodie. After having been unfairly tagged as snitch, Poot knows their friend was not long for the world. Brutal and quick, Poot spared Wallace further misery but also Bodie who despite his bravado, never was a killer, but rather a teenager navigating some dangerous and complicated waters.

Unlike the kind of discourse that led George Zimmerman to assume Trayvon Martin to be a senseless black delinquent, devoid of feeling except malice, the Wire gave its characters a full emotional life. When DeAngelo Barksdale turns away from his kingpin uncle, Avon Barksdale (Wood Harris) because he could not longer look at himself in the mirror, the viewer knew his time on Earth was limited. The system of supply and demand that created the drug game won’t allow for regrets or recriminations.  By the way, for all those commentators who seem to suggest that black America’s problem with drugs and crime is black America, they might want to consider all white kids that consume drugs in middle class homes away from the prying eyes of militarized inner city police forces and stop-and-frisk beat policies.

In the Wire’s season four, the plot revolves largely around the travails of the neighborhood junior high, where fear seems to be an ever-present thumb on the scales.  Randy (Maestro Harrell), one of the central characters that season, discovers the pain of being squeezed by two institutions meant to help. When he looks the other way ordered by two older boys to watch out for them as they hooked up with a female classmate in the bathroom, nothing protects him when the girl complains of sexual assault and the school demands Randy tell them what he knows. Of course, snitching doesn’t help either; when the school forces him to confess to what happened it sets in motion a series of tragic events.  The institutional authority set up to protect him, in this case the school, has its own interests which Randy, a foster child with no family, must meet. Without delving too deeply, Randy pays for just being in the wrong place at the wrong time. When it comes time for the police to protect him, a combination of institutional inertia and individual incompetence dooms him. Chance addresses this unfortunate reality, trapped between irresponsible gunplay and the CPD: “No love for the opposition, specifically a cop position / Cause they’ve never been in our position /Getting violations for the nation, correlating, you dry snitching.”

Nor does Chance, as pointed out earlier, dismiss fears by observers out of hand. He seems to understand how things look from the outside in, though he slides a sly Katrina reference into his attempt at empathy. “Probably scared of all the refugees, look like we had a fucking hurricane here/They be shooting whether it’s dark or not, I mean the days is pretty dark a lot/Down here it’s easier to find a gun than it is to find a fucking parking spot,” he acknowledges, but then takes a simple but profound turn: “I know you scared, you should ask us if we scared too.”

In the wake of Trayvon Martin and inner city Chicago, no one asks this question.  I taught high school in New York City for nearly a decade and worked in some pretty tough venues. Kids were angry as much because they hated carrying around this fear with them. It robbed them of confidence and framed the world in ways that made everything a zero sum game. Needless to say, their part of the equation rarely turned up positive.  If Trayvon Martin, middle class as they get, broke into a cold sweat when some goofy looking white guy with a gun began following him on a rainy night in Sanford, Florida, why is anyone surprised he might have responded aggressively?

“Everybody dies in the summer, so I pray to God for a little more spring,” Chance intones on “Pusha Man/Paranoia.” It is a heartbreaking admission and hardly the only one. “It just got warm out, this shit I’ve been warned about/I hope that it storm in the morning, I hope that it’s pouring out/I hate crowded beaches/ I hate the sound of fireworks./And I ponder what’s worse between knowing it’s over and dying first.”  Granted, Biggie engaged similar issues but I’m not sure anyone as young as Chance—perhaps Kendrick Lamar—has demonstrated such a keen sense of empathy, outrage, humor, and pathos.  Summer’s hot, and Acid Rap won’t keep you cool, but its balance of nostalgia, anger, and vulnerability will distract you from overheated talking heads that have made an already sweltering summer so flammable.