“I think she’s bipolar, or lactose intolerant, one of the two.”

What could be more suited to 2014 than a film about collective punishment? It was a year when skin color seemed to prejudice police offers to exercise lethal force against Eric Garner and Michael Brown; when members of the Muslim Brotherhood were cavalierly sentenced to death en masse by Egypt’s new, US-backed dictatorship; and when ISIS committed unthinkable acts of savagery in Iraq and Syria, decapitating innocent bystanders and burying women and children alive because they belonged to the wrong ethnic or religious group. Random people seemed to suffer for the sins of the system, or the nation, or the faith—held accountable, unaccountably, for the perceived wrongs committed by others.

If the analogy seems inapt or ill-fitting, it is perhaps because the crimes occur at different levels of scale. In Calvary, one key character experienced molestation as a child, and he decides to exact his revenge on one man as a representative of the whole—as a prosecution against the entire institution that brutalized countless, nameless others for decades, if not centuries. In Iraq or Palestine, the victims seem many; in Ferguson, perhaps fewer in number, though no less significant. But the correspondence between collective guilt or blame and individual suffering remains as vexed in Kobani or Gaza as it is in McDonagh’s film.

The story begins with Father James (Brendan Gleeson) taking confession in his small-town, Irish parish. The confession begins with a startling line—“I first tasted semen at the age of seven”—and continues with a horrifying description of ongoing sexual abuse over the course of five years. The testimony ends with the confessor’s astonishing vow to murder Father James in a week—not because he was a bad priest, but because he’s one of the good ones. Someone has to be held to account, and—in the grand spirit of terror, which means to shock and rattle the conscience—it’s him.

Father James is a quizzical character, and he responds to the death threat—from a parishioner he seems to know, though through most of the film the viewer is not clear which townsperson it is—with a kind of existential diffidence. No doubt he is aware that death could be just around the corner, but he plods through the rest of the week over the course of the film, attempting to solve his congregants’ problems while bemusedly weighing the possibility of his own impending mortality. 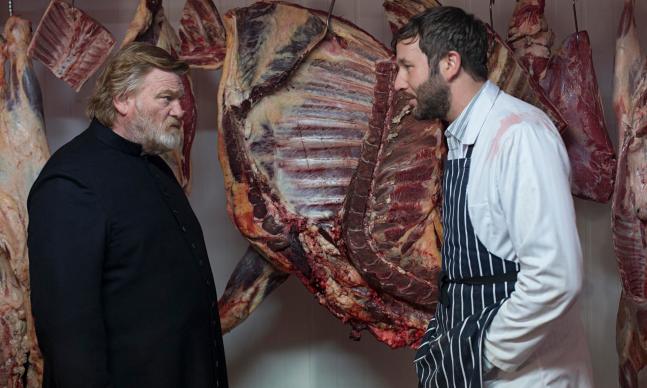 In the process, we see that James is no ordinary priest. For one thing, many of the townspeople don’t seem to particularly like him—he is “too sharp for this parish,” as Veronica Brennan (Orla O’Rourke) puts it, his book-learning and sarcasm and philosophical bent ill-suited for the local people to whom he is supposed to minister. He responds to their problems and questions with Socratic musings and rejoinders, which evince a spirit of intellectual exchange but mostly end up seeming pompous and condescending to the locals. (In one indelible scene, Father James quibbles with one character, an obnoxious, nouveau-riche financier, over the proper use of the term “hoi-polloi.”)

The key to James’s character, and the secret of the film, lies in the curious fact of his career: he did not come into the priesthood from a young age. He was not always destined for the cloth, coming to it instead as an older man, having experienced the life of the flesh and turning to ministry only after a terrible tragedy struck his family. Thus, James offers viewers a sort of everyman view of the Church—he is in it but not of it, really, a wizened believer who had a “normal” life before joining the clergy and who had no part in the tragic abuses that now dog his institution at every turn. His unique circumstances allow viewers to see the Church from both inside and out, in a way that few treatments of the subject of child sex abuse have been able to do.

Indeed, Calvary is that most improbable thing—a black comedy about the Catholic Church’s chronic pedophilia problem. (Throw in a serial killer and a smidge of cannibalism, and you’ve got the main idea.) While other films, such as The Boys of St. Vincent (1992) and Doubt (2008), have understandably approached the subject of the Church’s systemic predation of children with suitably heavy drama, Calvary somehow manages to investigate the complicated legacy of guilt, responsibility, and trauma in Irish Catholic society with a sort of gallows humor—indeed, at times quite literally.

Father James’s parish is populated by a crew of complicated, often funny villagers, who do a delicate dance with their somewhat dyspeptic priest. Whatever personality flaws he may have, James is still one of the good guys, insufferable though he may be. McDonagh’s script allows these characters—butchers, writers, bartenders, mechanics, and housewives—to breathe through clever dialogue that has a play-like and existential cadence to it. (“I’ve exhausted all the possibilities of pornography,” one sheepish young man admits to James, frustrated at his lack of luck with the ladies. When the good Father suggests he go abroad to widen his prospects, he replies matter-of-factly: “New York? I’d only end up getting the AIDS, knowin’ my luck.”) The locals spar with each other, alighting upon the diminished moral authority of the Church, the quandaries of personal responsibility and agency, and the difficulty of holding people accountable versus letting go of the past. 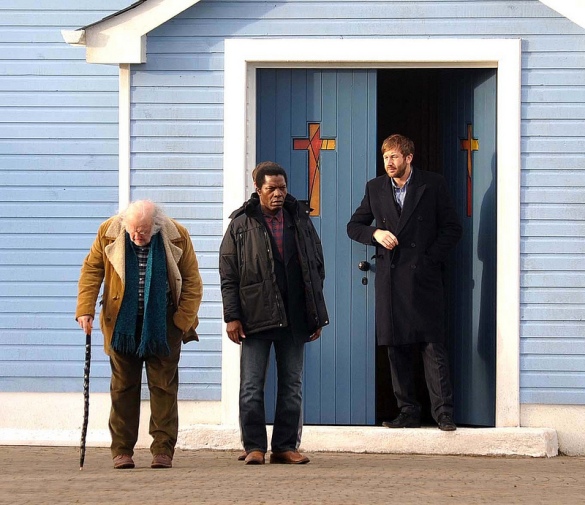 The Church, of course, would like to see the past go as soon as possible—especially as personified by a weaselly younger priest who would be happy sweeping absolutely everything under the rug—but Calvary makes painfully clear the fact that the legacy of trauma cannot be so easily erased. The scars are there, and they’re very real, for at least as long as the victims are alive, if not longer. No amount of litigation or public censure can change that. Throughout, Father James tells his congregants that “it’s not too late” to overcome their pain, but most seem convinced that “too late” has long since passed.

In the end, Calvary is a dark and sardonic view of the cycle of violence and trauma. Without giving too much away, it’s safe to say that the film implies the circle can never be squared—neither forgiveness nor revenge can change what has happened, but hatred and violence hardly offer solutions. However seductive the promise of catharsis may be, taking revenge only expands the circle of victims.