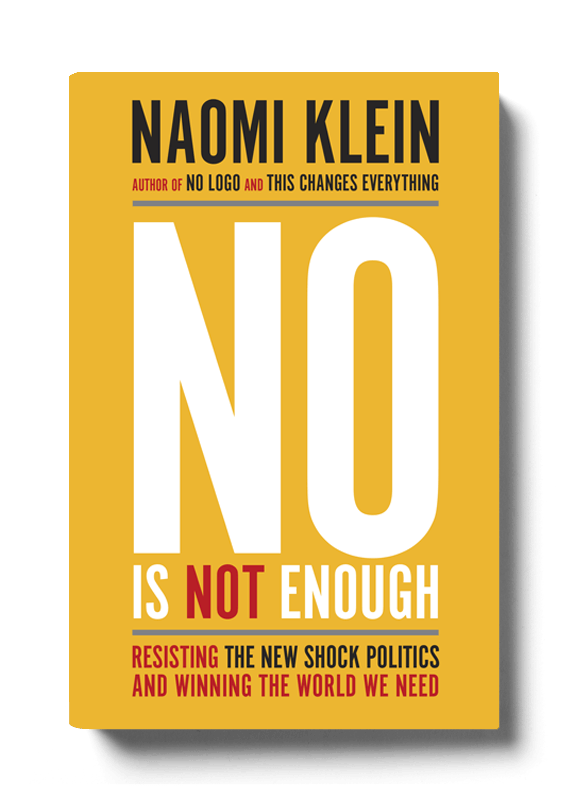 In his lecture “The Robbery of the Soil,” Rabindranath Tagore imagines the moon to have been once hospitable to life. This, he tells us, was the case until an intelligent species found life on it. This species soon busied itself with devouring and devastating this once thriving member of the solar system. Its acquisitiveness did not, obviously, lend it contentment and, instead, led to nature being stripped of its finite resources for this species’ infinite wants. To corner whatever resources remained, war among various sects of this species became unavoidable, and they ended up emptying their home of water and vegetation and reduced it to a desert. Life on the moon, ultimately, became unviable. Moon’s children had ended up consuming her. Tagore compared this species to humankind and its obscene appetite which, for him, imperiled the integrity of our planet Earth. In Naomi Klein’s No Is Not Enough, “endless consumption,” she tells us, is a tragedy that we as a species can ill afford.

Our need and desire to consume brands and feel part of a community—owners of Apple products, for instance—finds an outlet in consumerism owing to the collapse of real communities in the spaces we inhabit. The atomized and individualized existence of members of urban communities does little to fill that innate and evolutionary desire of human beings for the need to belong and fulfill our clannish tendencies. Such demands are generally catered to in close-knit collectives like those found in rural communities and certain urban spaces but, in the main, are absent in 21st century urban formations. Brands like Nike, Apple, and Starbucks, according to Klein, are fed to and consumed by us in such a manner that they succeed in our yearning “to be part of a tribe, a circle of belonging.”[1] Kids at school wearing Nike sneakers might imagine themselves as being affiliated to the ‘Nike club’ before huddling together and assuming an air of superiority in relation to those wearing shoes from other brands or budget footwear.

This leads us to fill our lives with objects instead of people and given that there is no dearth of brands or brand upgrades available for us to consume at any given moment, the upshot is mindless and unquenchable consumption. It hardly needs repeating that this is something our planet cannot sustain. In the meanwhile, it also occasions the rise of the likes of Donald Trump whose “presidency is in fact the crowning extension of the Trump brand.”[2] Because that is exactly what Trump has been for all his years in the public eye: a brand.

Donald Trump makes his money by lending his name to hotels, towers, golf clubs and, for those of us of more modest means but wishing to take a lick of his success story, neckties and belts. For all the glamour attached to the name, Trump brands do not fare all that well on lists that feature other brands of the same type—no Trump hotel in the top ten in the world, Klein reminds us. But to become fixated on this is to miss the point which is that the Trump brand is synonymous with wealth and an attitude that favors winners over losers. Anything besides this is a mere detail. Would you aspire to be a hobo (the first shot of the first episode of the television show The Apprentice) or a Donald Trump in a limousine (the next shot)?

Donald J. Trump made his first public appearance in 1976 when he skillfully managed to extort money out of a city in crisis. New York City had been until the 1970s, Klein tells us, a social democratic space of sorts, but federal and state budgets cuts and a severe recession reduced it to an impecunious existence. Trump offered to buy the celebrated Commodore Hotel (later the Grand Hyatt New York and one of the few properties purchased by him that does not carry his name) at a giveaway 9.5 million USD. He then managed to avail himself of a taxbreak bonanza. This bonanza had cost New York 360 million USD until last year.

I wish Naomi Klein made mention of Robert Moses—architect and planner of modern New York City—who affected the lives of so many of its residents, especially the most vulnerable who were already experiencing life on the margins of the metropolis, through his works involving the construction of “bridges, tunnels, expressways, housing developments, power dams, stadia, cultural centers” as Marshall Berman masterfully recounts in All That is Solid Melts Into Air: The Experience of Modernity.[3] Berman grew up in the Bronx and he recollects Moses’ plans for the Cross-Bronx Expressway, a structure whose construction demanded that entire neighborhoods be rammed through. The project went ahead without a care for the occupants of the affected neighborhoods.

While it may seem misplaced to complain about the non-appearance of Moses in a study which is largely a critique of the marketization of our daily lives and communities, my point is more fundamental. Social democracy in New York was not successful in creating a public domain where both fortune and misfortune were shared by all on an egalitarian basis. In that sense, at least, it was not quite different from a Trumpian age which favors a group of people over all others. Also, I consider the omission of this aspect of pre-Trump New York regrettable because an uninformed reader might assume that before the collapse of the social, economic, and political arrangement preceding Donald Trump, the powers that be were fair and impartial. Our lived experiences were not as shallow as they are today but this moment in social democracy had, lest we forget, proceeded from and was simultaneous with a pursuit of modernity that had shown little regard for the most powerless New Yorkers.

But the crisis today is much deeper and Trump is a mere symptom of the crisis that has allowed him to occupy the most powerful job in the world. That crisis, the author tells the reader, is one that is rooted in the neoliberal ideology. That very doctrine which places all faith in the market and its supposed ability to regulate itself and all of us, including nature, without a guiding hand. Klein states that

Trump is the product of powerful systems of thought that rank human life based on race, religion, gender, sexuality, physical appearance, and physical ability—and that have systematically used race as a weapon to advance brutal economic policies since the earliest days of North American colonization and the transatlantic slave trade.[4]

Today, such an economic policy follows the logic of neoliberalism. Naomi Klein, predictably, calls for an alternative that will replace neoliberalism or disaster capitalism, that is to say, capitalism which profits from disasters, both man-made and natural, with a more progressive future. Disaster capitalism, as Klein informs us in her latest work and in The Shock Doctrine: The Rise of Disaster Capitalism previously, marks time before an opportune moment comes along (or is created) to subject a society to a kind of economic therapy that mows down public services and utilities before privatizing them. Populations, still reeling from disasters or ‘shocks,’ are too unsettled to frustrate the usurious attempts of corporates who, at such moments, are only motivated by financial gain and nothing else.

What is the way out? As the book’s title suggests, saying “No” (to market fundamentalism) is, quite simply, not enough. That No has to be followed by a “Yes,” that is, a tomorrow imagined differently. At the Standing Rock Indian Reservation Naomi Klein caught a glimpse of this Yes when Native Americans and others “were learning to live in relationship and community with the land” just last year. Centrism and Liberalism be damned, Klein feels, for their overly cautious approaches to the maladies we face (sorry, Hillary). Besides Standing Rock, the author’s attention might perhaps be drawn to the workers of the Vio.Me. factory in Thessaloniki, Greece and their bold experiment in non-hierarchical, equal pay self-management which offers us another such glimpse.

Naomi Klein’s policy statement, co-drafted with sixty others, is titled The Leap Manifesto and if its contents seem “utopian,” well, it is because she calls on us to imagine a utopian future—one attempted, for example, by the flower power generation of the 1960s. My generation, on the other hand, has never known anything apart from liberalization, privatization, and globalization. We grew up in the age of TINA (“there is no alternative” to neoliberal capitalism) with most of us having suspected that our solutions lie within. Klein passionately believes that they lie outside of the frame of neoliberalism and brand fetishism.

The Leap pushes for a Canada that, in the first instance, respects and recognizes the right of its indigenous peoples to their land and demands that they be the first beneficiaries of public funds for their very own clean energy undertakings. It also moves away from any effort to create a hierarchy of crises and instead insists that every crisis merits equal attention that needs to be repaired in concert with every other predicament. And we would be making a mistake if we launched our respective struggles from our own little corners “without mapping the connections between our various struggles.”[5] And then, embarking on a joint struggle. The revolution shall be intersectional.

Arko Dasgupta is a PhD candidate at the Centre for Political Studies at Jawaharlal Nehru University. His thesis imagines alternative futures using the thought of Rabindranath Tagore and Mohandas Gandhi.

[2] Klein, No Is Not Enough: Defeating the New Shock Politics, 5.