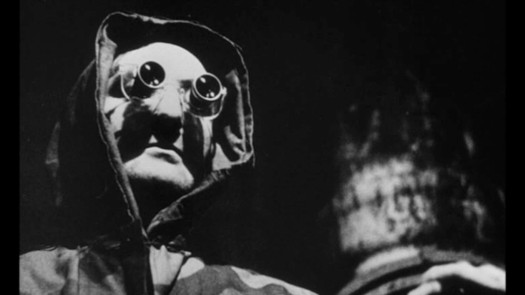 Chris Marker’s groundbreaking short film La Jetée doubles, incredibly, as one of the most lyrical meditations on two time-honored themes: the end of the world, and time travel.  These tropes have been recycled again and again in film, fiction, and television, of course.  The Terminator is sent back in time to kill young John Connor, with the aim of neutralizing the future Skynet’s foe, the leader of the human resistance; later, the same robot is sent back to save the messianic John and his Mother Mary. Rian Johnson’s Looper features a similar seeing-yourself-die scenario as La Jetee, along with the same kind of lapidary plot.

In this way, Marker’s film is almost the ur-text for apocalyptic time travel movies. If we could just go back into the past and stop this one thing, then all the other bad stuff wouldn’t happen.  It’s much like the hypothetical about asking whether you would be willing to go back and kill Hitler as a child, in order to prevent the Holocaust. Historians call these counterfactuals (what if the Confederacy won the Civil War?), but often enough they are just moral and ethical thought experiments.

Terry Gilliam’s 1996 film 12 Monkeys memorably reworked the 28-minute La Jetée into a full-length film, stocked with A-list actors and a Hollywood budget.  In the process, Gilliam also worked in themes of environmentalism and terrorism that were certainly not present in the original 1962 film.

The movie fully embodies the twisted perspective and visual flair of Gilliam that fans will recall from classics such as Brazil (1985), situating Marker’s story in a more spacious, extravagant world than the claustrophobic one we find in the short film’s staccato, still images and poetic voice-over.  Miraculously, almost, it translates a beloved foreign classic into a Hollywood film language without doing unspeakable violence to the original material.  (I’m looking at you, Wing of Desire/City of Angels.)

Like almost all time travel films, 12 Monkeys plays with issues of causality, free will, and destiny, as characters move in and out of the past, present, and future—all relative terms, in any case—with ease.  It ends with a scene nearly identical to La Jetée, where a character, as a young boy, witnesses the death of his future self.  But the future self had also been sent back in time to prevent a catastrophe that was ultimately going to happen no matter what.  So the loop, so to speak, is complete—no matter how much human annihilation was at stake, and however much human agency was expended, and however much technological ingenuity was applied, the end result was the same. 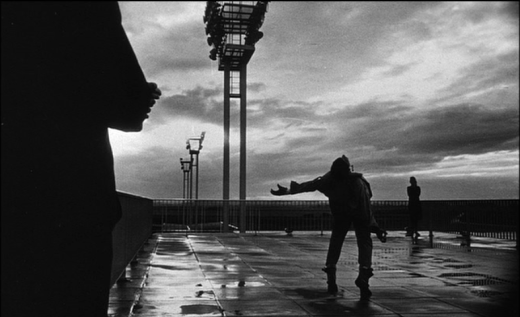 The film’s underlying pessimism was refreshing in the triumphal 1990s, when history had famously ended and capitalism was on an endless upward trajectory.  The Spice Girls’ “Wannabe” was one of the top hits the same year the movie was released, signaling the baleful advent of the late 90s mania for boy bands, girl groups, ska, swing, and everything upbeat.

Viewed from a twenty-first century lens, through, the movie looks quite a bit different.  First, its dark view of terrorism and ecological destruction does not feel as hypothetical as it did in 1996, but quite real and palpable—considering everything from Al Qaeda to ISIS to Katrina to Puerto Rico under water and California in flames.  The film may have caricatured environmental concerns in its portrayal of eco-extremists—almost certainly modeled on the Earth Liberation Front and Animal Liberation Front—but such anxieties are far more widely understood and accepted now than they were then.  And its sense of existential futility resonates with the times we’re living in.  (It’s also a relief to see a film where terrorists are portrayed as goofy hippies from Evergreen State College and not swarthy foreigners, for what it’s worth.)

Meanwhile, 12 Monkeys’ depiction of airport security seems beyond quaint today—as if from another world or another civilization.  Madeleine Stowe’s character can just show up and buy a ticket under a fake name, no questions asked.  A clearly weird dude is able to take huge vials of biological specimens on a flight, no problem?  These days, I can’t even take my shaving cream on a plane without being subject to a full cavity exam.  The movie harks back to a time when getting on a plane was almost as easy as getting on a bus, which today seems both nostalgic and achingly desirable.  Yet to the post-9/11 mind, 12 Monkeys suggests that it’s remarkable that more tragic events didn’t happen, given the lax security of the 1990s. The film is thus disturbingly familiar and yet inescapably distant in time.

12 Monkeys ends with an ironic twist, in which a character who will be notable in the future turns out to be a passenger on the final, fateful flight.  She rants about all the violence going on in society: “Now they’re even shooting people in airports!”  Maybe, she says, humankind shouldn’t make it after all.  Given the numbing drumbeat of school and workplace shootings and police murders of unarmed civilians in the twenty-one years since the film’s release, such a sentiment feels like an innocent time capsule from a bygone age.  The human race was not, in fact, exterminated in the late 1990s, as the film portends—but we have been doing our damnedest ever since to make sure it is.

Alex Sayf Cummings is an associate professor of History at Georgia State University and author of the book Democracy of Sound (Oxford, 2013).