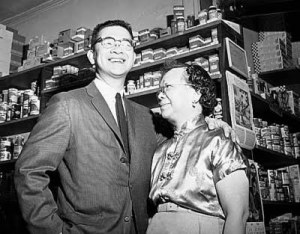 The past thirty years have witnessed a proliferation of works focusing on Asian Americans. Ronald Takaki’s contributions alone include Strangers from a Different Shore, A Different Mirror, and Hiroshima: Why American Dropped the Bomb, all of which critique American racial ideology, especially its effects on discursive attitudes toward Asian Americans. Lisa Lowe’s 1997 work Immigrant Acts argues that Asian American culture exists as a site of agency and resistance against the very racialization wrought by American racial ideologies. For Lowe, the importance of Asian Americans lay not only in their own culture and history, but also in their relation to citizenship: “Asian Americans, with the history of being constituted as “aliens”, have the collective “memory” to be critical of the notion of citizenship and the liberal democracy it upholds; Asian American culture is the site of “remembering” in which the recognition of Asian American history in the present predicament of Mexican and Latino immigrants is possible.” (Lowe, 21)

Four years later, Nayan Shah’s Contagious Divides: Epidemics and Race in San Francisco’s Chinatown contributed to the dialogue focusing on how the efforts of public health officials helped construct a Chinese identity conflated with disease, vice, and filth. Shah emphasizes the importance of race, class, and nationality in shaping the discourse of epidemics among experts, doctors, social critics, and government officials. Like Lowe, Shah acknowledges the key role of national and local memberships in mediating such discourse, writing, “In San Francisco, the constellation of race and public health pivoted upon systems of governance and citizenship.” (Shah, 6) 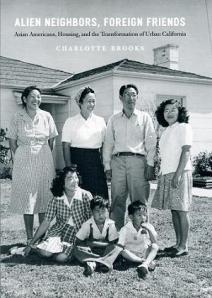 Brooks’s Alien Neighbors, Foreign Friends reorients housing history in San Francisco and Los Angeles to examine the demonization of Asian American homeownership, as segregation in the two California cities focused nearly exclusively on Asian Americans prior to WWII, including Chinese/Chinese American, Japanese/Japanese American, and Filipino/Filipino American. Moreover, Brooks explores the relational nature of race in Los Angeles, as the city’s racial logic grew incredibly byzantine in the face of growing diversity. San Francisco’s nativism never secured the same support in Los Angeles, but Angelenos expressed their own strain of anti-Asian racism. Finally, Brooks illustrates how Cold War foreign policies directly affected domestic issues such as housing. In this way, Asians maintained the very foreignness that prior to WWII led to their exclusion. “By the 1960s, the supposed Asian American “foreignness” once used to defend residential segregation became white Californians’ new rational for Asian American inclusion,” Brooks writes. (194) Citizens and officials began to worry that violence and discrimination against Asians undermined Cold War initiatives. This concern contributed to a public discourse that now celebrated Asian Americans’ presence in society, though as guests rather than citizens.

Brooks traces attitudes toward Asian residential segregation which arose in Los Angeles and San Francisco. Beginning with San Francisco’s Chinatown, Alien Neighbors, Foreign Friends recounts the violence and coercion endured by west coast Asian populations. Though today Chinatown is often seen as a quaint tourist heaven, Brooks (with the help of Shah’s work) links this development to its exclusionary, race-driven point of origin. The paucity of the African American population, along with a fluctuating Mexican/Mexican American community, left both groups outside the direct concerns of many middle class white leaders. Instead, working class and middle class leaders demonized the much larger Chinese (SF) and Japanese (LA) populations. The immigrant background of many San Franciscans heightened their desire to mark the Chinese as others, thus enabling such individuals to claim the benefits of whiteness more forthrightly, which some Eastern and Southeastern Europeans believed they had been denied.

If in the late nineteenth and early twentieth century, San Francisco’s Chinatown drew derisive glances from the city’s white citizenry, by the 1920s its function as a tourist destination altered perceptions. Chinese merchants and proprietors adapted to the white prejudices, presenting Chinatown as “essentialized” version of China itself. “San Francisco’s Chinese Americans faced a related dilemma,” Brooks argues. “To draw middle class white tourists with money to spend, Chinatown had to at least flirt with the kinds of exotic stereoypes that frustrated and stymied Chinese aliens and American citizens alike.” (34) Of course, such developments paralleled similar processes occurring in Harlem, where white New Yorkers could drift uptown to enjoy black American life for its “exotic” appeal while confining it to the famous black neighborhood’s borders. Unlike black Americans, Chinese residents’ lack of citizenship undermined their political influence. Much of Chinatown remained under the purview of local elites with the larger municipal government ignoring Chinatown, except to label it as vice-ridden and diseased. Though by the 1920s and 1930s, nativists tolerated the Chinese, they did so only if the population remained bound by Chinatown’s parameters.

Though Los Angeles shared a strong anti-Asian bias, the diverse nature of L.A. in the 1920s blunted the strength of nativists while contributing to a tortured racial logic/policy that lacked consistency. Unlike San Francisco, in which much of the population could claim recent European roots, L.A.’s citizenry hailed in great part from the Midwest and South. They brought with them racial attitudes that marginalized most of the city’s minorities, especially the Japanese. L.A’s sprawling nature mitigated some hostility, as Brooks points out: “Housing’s intensely local nature forced anti-Asian activists to invest significant time and resources in small areas that yielded only limited rewards.” (40) Still, even if San Francisco’s nativist organizations found shallow support in L.A., much of the local population shared their larger ambitions. “Like San Francisco nativists, Southern California’s most fervent anti-Asian activists sought not just to segregate the Japanese in Los Angeles but to expel them from the state altogether.” Of course, Brooks also suggests that most white residents who cooperated with activists only hoped to expel the Japanese from Los Angeles, not the nation.

The presence of numerous minority groups complicated any clear, rational explanation for discrimination. In fact, what developed was an uneven racial stratification where all non-whites were denied full equal citizenship, but some more so than others: “The unequal status of different nonwhite groups in Los Angeles created a legal racial hierarchy of housing opportunity in the city.” This hierarchy resulted in the growth of interracial neighborhoods such as the “racially unrestricted neighborhoods straddling Central Avenue” where both Japanese and Black Americans occupied housing. Of course, as the effects of the two great migrations became clear, white hostility to black homeownership and integration grew such that “as the city spread, the proportion of housing open to blacks shrank.” (Brooks, 60)

The previous example points to one of Brooks’s key arguments — that the relational nature of identity both between non-whites and whites and between non-whites themselves illustrates the confused nature of racial discourse for much of the twentieth century. When few blacks resided in San Francisco and Los Angeles, they failed to attract the kind of resistance that the significantly more populous Chinese and Japanese communities endured. However, as demographics shifted, so too did whites’ concerns. The influence of foreign affairs and policies also greatly impacted post war shifts (see below). Finally, relations between non-white communities sometimes featured cooperation and other times conflict. For example, prewar housing restrictions in Jefferson Park allowed for Japanese residents but not Mexican or Black homeowners. Such restrictions demonstrate “how the strength of legal, federal, and white public support for residential segregation in L.A. encouraged different groups to jockey for position rather than unite for greater political power,” Brooks says. (124)

Postwar San Francisco illustrated similar tensions, as Chinese elites resisted integrating Chinatown: “Most Chinese Americans deplored residential segregation in general, but they had won the promise of a project for their district by working within the Authority’s system. Few wished to lose any of the precious promised units of housing to integration especially as the city’s racial demographics changed.” (Brooks, 154) By the 1960s, Chinese American leaders viewed Chinatown as a culturally distinct space, but African Americans who had hoped to integrate the area did not agree. “To black critics,” Brooks writes, “Chinatown was merely symbolic of the way Chinese Americans were adopting the same practices as white homeowners.” (226) Moreover, occupational and residential segregation meant few interactions between African Americans and Chinese could develop. Likewise, the WWII internment of Japanese nationals and Japanese Americans led some African Americans to purchase those homes and businesses formerly owned by Japanese American proprietors. The evolution of L.A.’s African American enclave of Bronzeville relates directly to the older Japanese American Little Tokyo neighborhood. Still, Brooks acknowledges the work of interracial organizations like the Citizens’ Housing Council, “a multiracial group that monitored the Los Angeles Housing Authority.” (124)

The incorporation of a transnational perspective greatly enhances Brooks’ observations. The most striking illustration of Cold War foreign policy affecting domestic issues can be drawn from the post war experience of both Chinese and Japanese Americans. While the period from 1943 to 1952 saw the collapse of “urban California’s legal racial hierarchy … residential segregation of all nonwhites persisted.” The dynamics of race emerged sharply altered. Obviously, Japanese internment illustrates a clear correlation between foreign and domestic policies, but postwar housing arguments demonstrate this relationships’ persistence. For example, if Los Angeles’ Japanese Americans suffered internment during the war, American efforts to rebuild Japan along with the valorization of Nisei war service subsequently provided a direct counterweight to anti-Asian attitudes. The influx of African Americans also contributed to this shift, as anti-Japanese agitators found their biases overwhelmed by others. “In Los Angeles, which by 1942 was experiencing a massive influx of people of all racial backgrounds, the question quickly lost its immediacy after internment,” Brooks says. “The issue of migration – particularly of blacks and Mexican Americans – completely eclipsed it.” (132)

San Francisco’s Chinese population – once harshly demonized prior to WWII – also experienced newfound American support. China’s WWII support along with later American military interventions in Asia made treatment of Chinese and Chinese Americans a key Cold War issue. Brooks points out that this “transnational identity” undermined Chinese claims to national membership as they were seen as permanent foreigners, albeit welcome ones. Also, as with the Japanese American example, the arrival of larger numbers of African American residents recast white homeowner concerns that now Chinese Americans came to be seen, along with other Asian Americans, as the “model minority,” to be contrasted with more “troublesome” racial/ethnic groups. Accordingly, Brooks suggests that American interventionism in Asia along with pervasive domestic fears of communist infiltration and agitation “spurred white Californians to reconsider the impact of their segregationist decisions. In the end, the deepening Cold War short circuited the emerging pattern and replaced it with a far different one” (193) White homeowners continued to exhibit a desire to live apart from nonwhites; even when they accepted Chinese or Japanese American neighbors, they did so out of a sense of anti-communism rather than any nod toward racial equality. As one white resident, who supported Nisei WWII veteran Sam Yoshira’s attempt to buy a home in Southwood (South San Francisco), commented, “My property values aren’t as important as my principles.” (Brooks, 206) Such admissions reveal not only latent racial attitudes but also the effect of FHA/HOLC housing policies that dismissed communities with nonwhites as ineligible for home loans subsidized by the federal government.

Ironically, if early Cold War policies enabled Asian American populations to move away from segregated communities, the emergence of the Vietnam War promoted solidarities with those nonwhites they “had left behind.” Moreover, as Lowe points out, the very Asian wars that served to reoriented Chinese, Japanese, Filipino, and later Vietnamese American citizenship also ruptured each community’s collective memory: “The ‘past’ that is grasped as memory is, however, not a naturalized, factual past, for the relation to that past is always broken by war, occupation, and displacement,” Lowe writes. “Asian American culture ‘re-members’ the past in and through the fragmentation, loss, and dispersal that constitutes the past.” (29) Still, the problem of race remained. As Brooks concludes, “California at mid century foreshadowed America at century’s end: a place where race was far more complicated than black and white and where international conflicts affected domestic race relations.” (239)