Twitterer and activist Ramez Mohamed speaks to a brighter future that many of us have simply stopped thinking about.  For decades, left politics in most of the world has been preoccupied with fighting off the forces of militarism, racism, fundamentalism and the extreme neoliberalism of free markets and property rights. Only occasionally have liberals and socialists found the time to formulate their own social democratic alternatives and rarely have they been able to pause to dream of an ideal future. Big visions seem to belong to a bygone era of 1968 and the barricades, when activists from Morningside Heights and Mexico City to Tokyo and Paris spouted slogans like “Be realistic, ask the impossible.” The New Left of that day has since been mostly dismissed by a new wave of scholarship as too sexist, self-involved and painfully middle-class to amount to much – the unfortunate result, in my view, of a younger generation of scholars bringing their jaundiced eye to the subject, and of weariness with the constant nostalgia and mythologizing of the Sixties by those who experienced it.

Thus it is not surprising that the new political synthesis of Michael Hardt and Antonio Negri’s Empire failed to persuade many jaded and hard-bitten leftists. Critics dismissed the authors’ vision of a diverse and decentralized “multitude” battling it out with an equally dispersed and flexible “empire” of global capitalism as a mishmash of fuzzy concepts. Their manifesto was characterized by a “certain zipless fuck quality” in Bruce Robbins’s memorable phrase – long on rapturous language and fond wishes but short on programmatic details.

We have written before on Tropics of Meta about the difficulty of working out the implications of Hardt and Negri’s ideas in the real world. They suggest that a movement could be built that incorporates the “irreducible” differences of its constituents – whether in terms of gender, creed, race, sexuality, or economic interest – to fight exploitation and inequality. To a certain extent, the project they describe sounds a lot like coalition politics within a liberal democratic context, despite the fact that Hardt and Negri’s work is dressed up in the language of academic Marxism. Certainly, their work is informed by the political shifts within the United States and Europe in recent decades, as struggles based on race, gender, disability, and sexuality (“identity politics”) and ostensibly non-economic interests (environmentalism) seemed to surpass traditional class-based movements. 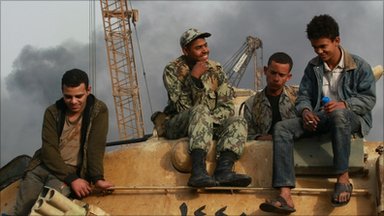 But I sense that the multitude represents an aspiration toward anarchism. Anarchism and Marxism have often been seen as distinct and even contradictory, even though the end of history envisioned by Marx seems like an anarchist one – a transition from socialism to communism in a stateless and classless society. Marx hoped that the abolition of capitalism would eventually lead to a world where people could freely organize their own affairs and reap the value of their work without bosses, police, presidents, generals, or executioners interfering. Anarchists and Marxists have often been in tension, of course – socialists and communists organized in hierarchical and sometimes authoritarian political parties and armies did not seem likely to advance the anarchists’ goal of freedom from subjugation. In short, the rejection of Hardt and Negri’s concept of the multitude reflects a long-standing suspicion between libertarian socialists who propose a spontaneous, decentralized and non-hierarchical form of movement and more traditional socialists and communists who see such programs as fanciful recipes for disorder and failure, unequal to the challenge of fighting capitalism or organizing a new society.

A deeper problem lies not just in strategies of organization but also in the way that economic and political struggles are understood. For people to organize into a “multitude” against capitalism, they would have to reconcile widely divergent identities, preferences, and economic interests to pursue a common goal. This vision does not match up with a traditionally Marxist interpretation of society as made up of groups struggling for their own material interests, where the working class struggles against the owners, bosses, and capitalists. In contemporary American society, the situation is further complicated by the large number of white-collar workers – teachers, scientists, lower and middle management – whose class identities and allegiances are unclear. Although the Weberian view of a complex society made up of multiple identities contradicts the Marxist idea of an increasingly polarized class struggle, both stories bode poorly for the prospect of unified political action.

For a different point of comparison, we can look to American political culture in the early twentieth century. Americans in the Progressive Era loved to talk about the “public interest” versus “the interests,” the greedy, pernicious parties like corporations and trusts who sought to hurt the people at large for their own benefit. It was widely believed that the interest of the public could be identified, in contrast to the narrow, harmful pursuits of a few. As Daniel Rodgers has pointed out, this language changed in the 1930s, as New Deal liberals under Franklin Roosevelt began to see the “public interest” as a chimera. The role of the state, they believed, was to recognize that society consisted of various interests – business, labor, farmers – and negotiate compromises among them. Government could serve as a “broker” among competing parties. The idea of a general interest of all citizens or workers was less suddenly salient, although historians have argued that a broadly shared, albeit not universal, identity of the “consumer” began to emerge in the late New Deal and after World War II.

Which is it? Do we believe that people from many walks of life, in one society or even across national lines, could organize behind some kind of shared goals without their divergent interests getting in the way? Is the Marxist or anarchist dream of a free, stateless, classless society a complete historical relic, limited to the era before the rise of a brutally authoritarian regime in the Soviet Union discredited communist idealism?

In the twenty-first century, activists have made feeble attempts to build such a broad-based movement through programs like World Social Forum, yet recent events in Egypt provide a suggestive example for our inquiries into the basic stuff of politics and human nature. United in a spirit of nationalism and opposition to a despotic regime, a diverse array of Egyptians has come out on to the streets, including young and old, Christian and Muslim, Islamist and secular, factory workers and middle class professionals and students, belying American fears that a fundamentalist movement is taking hold of the country. With little in the way of formal organization by parties or armies or NGOs, Egyptians have managed to take over significant territory in the Arab world’s biggest city and send a shockwave of fear through a vicious dictatorship; whether or not they achieve their ultimate goals, their sudden influence has been tangibly felt by one of the most entrenched and arrogant regimes in the region.

One of the most remarkable aspects of the uprising has been the adroit way that protesters have coped with the overwhelming and frightening challenges of resisting an unpredictable regime. Neighbors organized to defend their communities against looters even as critics accused the government of encouraging plainclothes police and freed prisoners to terrorize the population and sow disorder, providing a pretext for government repression. In the main site of demonstrations, Tahrir Square, protesters without any clear leadership organized to protect themselves against pro-government thugs and a wavering, ambivalent military. Demonstrators could be seen picking up trash, forming security, spontaneously setting up medical triage units for themselves and even extending care to the pro-Mubarak supporters who attacked them, some of whom wound up in impromptu “jails” set up in the Square. They formed a human chain to protect the antiquities of the Egyptian Museum from depredation. Some even declared the existence of an “autonomous republic” in Tahrir Square. If a mass of people, most of whom had likely never met before, could form a micro-society in the midst of chaos and bloodshed, in public space ostensibly governed by a dictatorship, without any one leader directing the activity, what else could people do?

For years, leftists have looked back to the Paris Commune of 1871 as a brief moment when people spontaneously organized a new form of society – something the Soviet Union and Hugo Chavez and others have never been able to achieve. In the best case scenario, protests in Egypt could lead to a pluralistic democracy, one that could be emulated by oppressed peoples throughout the region. Such an outcome would be a profoundly desirable change and is far from likely at this point. In any event, the window that has opened in Cairo in the last week offers a counterpoint to the abysmal neoliberal picture of crisis in recent years – when, for instance, disasters in New Orleans and Haiti and Pakistan revealed the despair of people left helpless when an impoverished and enfeebled state was unable to help them survive, and the strong were free to prey on the weak.

What we see in Cairo today are clearly extraordinary circumstances, in which people are able to coalesce around a relatively clear and unifying goal – ridding the country of its dictator president, Hosni Mubarak. It by no means provides a model of how society could be governed on a day-to-basis, when people deal with ordinary problems of managing resources and resolving differences, yet it provides a moving example of spontaneous organization that transcends the Hobbesian expectation of life as “nasty, brutish, and short” in a state of disorder. It symbolizes the positive possibilities of a typically pejorative word: anarchy. An Egyptian activist imagines a world without the secret police, the government’s gang proxies, the bribes, the abuse, the extortion – “an Egypt like Tahrir Square: organized, clean, everyone helping, loving each other.” It is not a world that is likely to be enacted there or anywhere anytime soon, in Egypt or America or Tunisia or Venezuela. But if we are looking for examples of how people in a revolutionary situation could organize their affairs without central organization or coercion, we could do worse than Cairo.

Abdulla, Rasha A.  The Internet and the Arab World: Egypt and Beyond.  New York: Peter Lang, 2007.

Hardt and Negri.  Multitude: War and Democracy in an Age of Empire.  New York: Penguin Press, 2004.