While browsing a junk shop in Elizabethton, TN (emphasis on the “beth”), I noticed an unusual book.  The store was crowded with knick-knacks that run the gamut from corny to creepy, but this slim volume stood out.  Its now-dingy yellow cover promised the secrets of “Martin Van Buren’s Cheese Cake” and “William Howard Taft’s Lobster Newburg.”  Published in 1968 by the Culinary Institute of Chicago, The Presidents’ Own White House Cookbook is one of those odd pieces of American memorabilia that, like president-themed LPs, seem like they could only ever have existed as a joke.  (Not unlike the book of 101 president-themed jokes that I got at a book fair in fourth grade.) They seem to evoke a time when naïve enthusiasm for the nation’s leaders seemed reasonable enough—in this book’s case, the 1960s; in my case, elementary school.  While there has no doubt been a profusion of merchandise to make money off of Barack Obama (and to a lesser extent, his predecessor), it still seems hard to imagine a book published today that features Ronald Reagan’s chicken cacciatore and Barack Obama’s coq au vin under the same cover.  Even if it did, one would have to be cynical.  Surely a hardworking intern from Brown spent the afternoon scouring epicurious.com to find the right candidate to serve as “Obama’s recipe.”

The 1968 cookbook, in contrast, practically invites a reader to imagine Theodore Roosevelt whipping up a batch of his famous indian pudding.  Inside, it admits that most recipes were those served to the presidents and their families by the White House chef over the years, but it still has the feel of a church cookbook, the kind where the mothers of the congregation each contribute their own trademark recipes.  The cover lists “John F. Kennedy’s Iced Tomato Soup”; you can picture yourself sitting around, drinking Tom Collinses with JFK, and you ask Jack what’s for dinner, and he says “I’ve got this great recipe for iced tomato soup!”  And then he spins around the kitchen and shows off his impressive handling of heavy cream and chicken bouillon.

While this image seems plausible enough for Kennedy, the playboy/proto-metrosexual sophisticate, it’s harder to picture Andrew Jackson doing a lot of cooking.   Except, perhaps, in an iron skillet by a campfire, wearing a necklace of ears from dead Injuns.  Old Hickory gets assigned “turkey hash,” in keeping with his rustic, Southern image.  (Of course, the book notes, “it was only natural that turkey was a favorite of many of our presidents.”)  It explains that Jackson’s beloved dish was “more of a gruel than a hash.  It would be called a thin fricasse of turkey today, and much too plain for modern tastes.”

Indeed, the fun of the book involves not just the ludicrous pairing of various presidents and their wives to various dishes (Lady Bird gets turkey dressing), but its window into 1960s food culture.  I may be unlearned in the ways of food beyond chicken fingers and quesadillas, but “lobster newburg” is a new one to me.  The recipes seem to belong to a once-dominant, mainline American culture, untroubled by notions of multiculturalism or regionalism.  If anything, these may be the tastes and traditions of a certain old-stock, WASP, Episcopalian kind of cuisine.  Presidents thrilled to the delights of “Phaesants with Spaetzle,”  “Cold Asparagus Chantilly,” “Stuffed Dover Sole,” and the irresistible “New England Boiled Dinner” (a kettle of beef brisket and potatoes).  In describing “The Buchanan Special,” the book notes that:

President Buchanan’s Washington table was set in elegance.  But at Wheatland, his Pennsylvania home, he loved to give sauerkraut and mashed potato parties. Surprisingly, the two have a natural affinity.  Most men love sauerkraut today…

I don’t know if sauerkraut retains its massive popularity in the twenty-first century, but what red-blooded American male doesn’t like a good sauerkraut and mashed potato party?

On the subject of festivities, we also learn of Chester A. Arthur’s proclivity for clambakes.  This is revealed in a recipe for “midwestern clambake,” which has to be one of the most Fifties expressions in the English language. Arthur, of course, has become a style icon of late, a sort of paleo-hipster with his luxuriant manscaping, mutton chops and what I imagine to be the smooth, satiny texture of his ruffled sleeves:

Arthur was a handsome widower, a gourmet, and the darling of the elite of Newport society. He enjoyed travel, and often went to Rhode Island to be entertained with a traditional New England clambake.  The oceanside pits were filled with fiery hot stones, lobsters, and clams.  The clams and lobsters were cooked, blanketed by seaweed.

The book advises inland readers, though, to seek out a 3-tiered clam steamer, “available in better department stores and specialty shops in metropolitan areas.”  Such a device could easily provide the plot hook for a classic sitcom of the period — say, a Dick Van Dyke Show episode in which Laura upsets Rob by bringing a clam steamer to their suburban New Rochelle home. 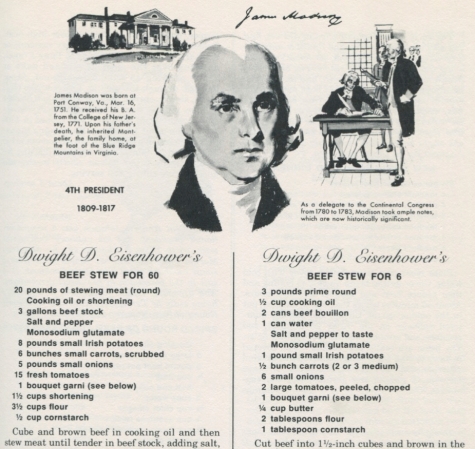 Overall, the book is amusing not just for its eye into mid-century American foodways or political culture, but the idea it promotes that elite politicians and their families make cheesecake just like anyone else–a US Weekly for foodies.  Or perhaps the logic runs the other way: you can have the same cheesecake Martin van Buren or JFK had served to them in the White House.  It’s not “George Washington Slept Here,” but it’s close enough.  Of course, it’s hard to believe that any of these rich, powerful families had their own special recipes or made their own food, especially when you reach the imperial presidency of the twentieth century.  Yet there’s something charming about the idea of Eleanor Roosevelt making something called Fat Rascals.  “The amusing title of this recipe, found in Mrs. Roosevelt’s famous cookbook, might have been applied as well to the children she raised in the White House,” the authors say.  Take that, FDR Jr.

Actually, it all raises an intriguing possibility.  Why not make some Fat Rascals of our own?  It could be a Julie & Julia for the C-SPAN set.  We could make the dishes and get a panel to judge them—a sort of Top Chef by way of Colonial House. Cornel West could be the cool black judge, and Doris Kearns Goodwin can be the incoherent, pill-addicted Paula Abdul character.  There could be a book, then a movie, then a TV show.  Short of a Survivor-style competition series about grad school in the humanities, I can’t think of a reality show I’d rather see.