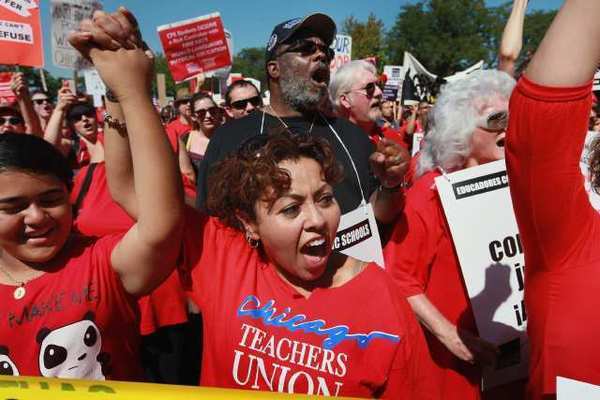 In the last week Chicago’s teacher strike has galvanized debate nationwide about schools, labor, and the so-called “education reforms” championed by both the right and liberals in the Obama administration.  These reforms include tying teacher pay not to seniority but to various metrics (primarily standardized test scores) and privatization schemes such as semi-public charter schools and vouchers.  Besides the immediate issues of pedagogy and policy, the Chicago strike is occurring in a political context in which Republican governors across the country, most notably Wisconsin’s Scott Walker and Ohio’s John Kasich, have worked assiduously to strip public workers of their bargaining rights and benefits, with varying degrees of success.  (Kasich’s anti-worker legislation was resoundingly rejected by voters in a referendum last year, while Walker won a powerful victory in a union-led effort to recall him; his own legislation, however, was struck down in court just this week.)

With a bargain potentially looming this weekend, we spoke with Tom Edstrom, an attorney who works with an AFL-CIO-affiliated union for his perspective.  (Note: his views do not necessarily reflect those of the AFL-CIO).

I see the differences as competitions between interest groups rather than as two visions of the Party.

The labor movement is a popular movement whose mission and strength derive more from its numbers than from its financial resources.  The labor movement represents the idea that working people should be afforded a fair share of income and other benefits that their labor helps to produce.  The labor movement also stands for the right of employees to due process and fair treatment in the workplace.  It’s been an important player in American civil society, along with religious organizations, civil rights and advocacy groups and other non-governmental organizations.

While some of the organizations that seek to weaken teachers’ unions are also in the category of popular organizations, there are significant financial players seeking to divert public education dollars to private hands, including for-profit organizations and non-profits that receive public money for other services.  In many of the non-public schools, the job of a teacher converts from a professional career to a shorter-term “McTeacher” model.  This model  disparately affects women, who comprised 76% of public school teachers in 2007-08.

Elected officials who administer schools are ultimately responsible for educational outcomes.  In labor relations parlance, educational  programs, class sizes, textbooks and pedagogical methods are “management rights”  which are not typically subject to negotiation with teachers’ unions.  Elected officials under political pressure to control costs and to explain inadequate educational outcomes sometimes to blame teachers rather than to either take responsibility themselves or devote additional resources to education.  Rahm Emanuel is in the camp of those who blame the teachers for poor educational outcomes rather than taking responsibility for management shortcomings in operating the system.  Teachers have only their bargaining power and appeals to public support to protect them from political scapegoating and the financial pressures of moneyed interests.

The Democratic Party, in my opinion, would strengthen itself by emphasizing its relationship with popular organizations.

Rahm was a Clinton Senior Advisor, and Edelman sounds like a similar animal considering his family’s civil rights history and the like.

To my knowledge, Emanuel’s professional background has been heavily involved in fundraising from wealthy individuals, both in the Clinton campaign and elsewhere.  It is not surprising that he would side with moneyed interests rather than with popular organizations.

I don’t know enough about Jonah Edelman’s background to know how his political views reflect or reject those of his family.  His position as head of “Stand for Children” puts him in the camp of the moneyed interests.  Edelman confirmed that his explicit goal was to weaken union power.

2) What do you make of this discourse of “the children” that seems to get harnessed and the way schools especially, for obvious reasons feed into this? In CA, Prop 8 was promoted by outside groups that used public education as the wedge to support what was in fact a homophobic referendum.  This kind of language seems to pervade everything in this debate.

The National Education Association was founded as a social movement advocating universal public education in 1857. The teachers’ union movement goes back to at least the 1916 founding of the American Federation of Teachers.  Today both organizations advocate for universal public education and the improvement of teachers’ wages, hours and terms and conditions of employment.  Terms and conditions of employment include better conditions for educating students.  State statutes and case law, however, generally place limits on the degree to which teachers and their unions can bargain about issues such as teaching methods and evaluation, as opposed to traditional subjects of bargaining (e.g., wages and insurance).

It is not clear what commitment the anti-teachers’ union interests have to universal public education or to high quality education.  In most sectors of the economy, cutting employee pay is not equated with improving service.  It is not clear why low-cost and short-career teachers would be considered more dedicated to children and more effective than longer-carer professionals who have honed their craft over a long period.  To propose cutting everyone’s pay because there are some less-than-effective teachers in the profession is an unwarranted collective punishment. And there are many social and economic problems that are beyond a teacher’s control.

3) What do CTU supporters and members say to accusations that the timing of the strike is “cynical”? I only bring this up because I ‘ve heard it uttered a couple times out here and in Sun Times articles and when I was a teacher in NYC we worked without a contract for several years and didn’t strike, though we also got paid better for concessions.  How do you think this will be portrayed nationally and what do you think the results will be?

“Cynical” is a term that better describes the Stand for Children legislative effort described above.  The teachers contract was due to expire, the City has just revoked the teachers’ pay raise in the last contract, the City was promising to close or “turnaround” more public schools, and hence cut teacher pay.   Contract expiration is the normal and appropriate time for a strike.  If anything, Emanuel, Edelman and their allies’ attempt to reduce the union’s power had the effect of igniting teacher anger and inciting a strike.  CTU President Karen Lewis succinctly summarized the situation:  “The only way to beat a bully is to stand up to a bully!”

4) If you had your druthers, what would a reasonable solution be here?

Not all of the bargaining issues are public, so I don’t claim any special knowledge.  The CTU is rightly demanding revisions to the evaluation process so that teachers will have better job protection.  The new CTU leadership and the membership as a whole is not willing to settle solely for pay benefits increases.

5) Finally, how much does this struggle represent the economic and political fortunes of 2012 America? A Sun Times article noted that it seemed worse than the earlier strike in 1987 because fewer homes had two parent workers (though this part could be dubious).  Don’t we also have more single mothers today? (Of course, the school system has been increasingly brown, black and working class, so maybe this stat refers to middle class homes since poor mothers have always had to work).

The struggle should be viewed in the context of the recent economic events — the Great Recession, the bank bailouts without mortgage bailouts, Occupy Wall Street and the popularization of the term “the 99%,” and the Koch-Brothers’ sponsored Tea Party movement.  The CTU strike represents a push-back by popular movements against the Bain Capitals and the Mitt Romneys of the nation who profit at the expense of the middle class.