In October 2014, Taylor Swift dropped her fifth album, 1989. Less than a month later in November, she performed the first track off 1989, “Welcome to New York.” Letterman guffawed, the crowd gasped, and Swift looked like the seasoned artist she is, confidently belting out the song’s chorus with hand claps and poise galore. Without a doubt, “Welcome to New York,” like many of the songs off the album, nails all the peaks and valleys one would expect from an earworm by Ms. Swift, and it opens with the kind of universal experience that any Midwesterner new to the city can understand. That first trip to the “village,” the crowds of fellow young people all jostling to see and hear what movies and television have told us about the East Coast behemoth, all wanting a piece, all hoping for an in:

Walking through a crowd, the village is aglow

Kaleidoscope of loud heartbeats under coats

Everybody here wanted something more

Searching for a sound we hadn’t heard before

Yet the New York Swift hails, no matter how sonically pleasing (and it is so, so pleasing), no longer exists, or if it does only for those in Ms. Swift’s income range. She might have been able to drop $20 mil on a Tribeca penthouse, but most of us can’t. Though more than competent as mayor, Bloomberg did little to nothing to prevent the city from becoming a haven for European, Asian, and American wealth as the rest of us poor slobs headed for Queens and the South Bronx—hell, even Brooklyn had become too expensive for the average school teacher.

“New York has closed itself off to the young and the struggling,” punk rock icon Patti Smith told journalists in 2010. Go to Detroit or Poughkeepsie, she argued. “New York City has been taken away from you. So my advice is: Find a new city.” Yet somehow, “Welcome to Detroit” just doesn’t have the same ring to it, no matter how true the sentiment might be. No, the Motor City gets songs about redemption like the mournful Gil Scott-Heron 1977 tune “We Almost Lost Detroit,” updated a couple years back by the band Dale Earnhardt Jr.

Now, no one here wants to rip Swift, if anything this writer and ToM contributor Adam Gallagher have lent our full throated support to this album. Sure, it’s melodramatic in moments and punctuated by the kind of oversized emotions of one’s early twenties. Nor does 1989 exude any sort of spontaneous punk catharsis. As New York Times critic Jon Caramanica noted in a review of the album, it’s “expertly constructed” and filled with “slightly neutered songs about heartbreak.” Not that the album lacks any emotion. “But she’s still Taylor Swift, which means she’s dreaming bigger and oversharing louder than anyone else in the game,” noted Rolling Stone in its review. “And she still has way too many feelings for the kind of dudes who probably can’t even spell ‘feelings.’”

Indeed, heteronormativity is the name of the game. Except for a line from the aforementioned “Welcome to New York”—“Everybody here was someone else before/And you can want who you want/Boys and boys and girls and girls”—the album’s romance exists in a completely heterosexual world.

Even Swift’s style, her New York period one might call it, seems cast in femininity. “Swift’s New York style was very femme and purposely put together, often in direct contrast to [model Karlie] Kloss, who lives in the off-duty model’s uniform of tees and sweatpants (probably pricey Alexander Wang sweatpants, but nevertheless),” wrote Grantland’s premier writer of all things Swift, Molly Lambert. A second generation Carrie Bradshaw, argues Lambert, 1989 represents Swift doing what every young twenty something arriving in New York is doing :“trying on identities in a metropolis, seeing what suits her best.” 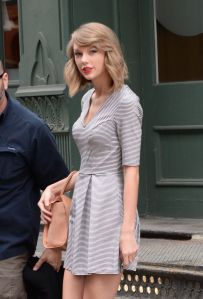 One should note this is not a criticism. Swift will never be Lady Gaga, tramping through the city’s gay scene with a thousand fellow “little monsters.” She will never be as baudy or calculatingly lewd as Miley Cyrus. Even Lana Del Rey’s noir persona can never be hers. Nor should she try to be: the strength in part is Swift knowing her lane or, considering her shift from country pop princess to Sex in the City player, lanes. As several critics have noted, she can’t be accused of any sort of cultural appropriation like those artists previously mentioned.

That’s the genius of 1989 and its opening track. The rest of the album sounds like an updated 1980s soundtrack to Generation X nostalgia. Pearl Jam, Nirvana, and, for those of us younger Gen Xers, perhaps the Strokes and Radiohead largely defined rock music in our lifetimes. But honestly, we always carried a torch for the goofy 1980s upon which 1989 visually and audibly capitalizes. Some of us might love Eddie Vedder’s earnestness or Kurt Cobain’s “authenticity,” but you can’t really dance to it. The opening track captures this nostalgia and evokes a NYC that unless we grew up there we never witnessed.

By the time this writer got to the Big Apple in 1999 for a high school teaching gig in the South Bronx, Giuliani had “Disneyfied Times Square.” People talked about bankers as “Masters of the Universe,” friends recommended I read Atlas Shrugged to understand where the city was going (admittedly, I dug the story even if I found the message completely noxious; life is complicated). Yet, it was the dystopian 1970s NYC of Martin Scorsese’s Taxi Driver that simultaneously fascinated and horrified many of us. Blondie and the Talking Heads at CBGB’s remained iconic even amidst the city’s struggles. This writer came to witness angry punks lashing out inappropriately and inebriated Queens municipal workers shit-talking the Yankees, not drunken bankers discussing their summer shares in the Hamptons. We all have our standards. Keep in mind, I was never disappointed; my time in NYC transformed me, but more because of my time in the city’s tougher corners as a public high school teacher—the kind of life I had seen on TV and listened to in songs that depicted the city in tougher times.

Whether Swift understood that the album would intersect two distinct generations, one cannot say, but as Caramanica points out, she’s written this narrative for herself when she sang “Someday I’ll be living in a big ol’ city” on the song “Mean” off of her 2010 Speak Now album. Like a newly arrived Midwestern kid, Swift’s still an outsider: “She is the butterfingers in a group of experts, the approachable one in a sea of high post, the small-town girl learning to navigate the big city,” writes Caramanica.

Clearly, 1989 eschews Swift’s ostensibly pop-country stylings for an updated 1980s sound that could not have been engineered better to appeal to tweens, teens, and even cynical Gen Xers.   The subject matter would please any adolescent worrying about their first crush or prom date, but because the album remains steeped in the music of the 1980s and because of its initial track and her recent time there, NYC nostalgia, it appeals to those of us that maybe it shouldn’t. With “Welcome to New York,” operating as a framing device and with Swift living and playing in Manhattan, it’s hard not to listen to the album and reimagine one’s own time in the city. Though NYC might be the worst place to move today for young aspiring artists or even high school teachers, it continues to coast on popular memory of the city. Detroit might be truly better, but NYC is still NYC. Besides when you’re young, you’re invincible. People might warn you about the dangerous East Coast metropolis but such warnings fall on deaf youthful ears. For us older folks, the nostalgia of receiving the same warning makes 1989 and its opening track equally enjoyable. “Forevermore/The lights are so bright/But they never blind me, me”—they might have once, but everything looks good a decade later, and judging from Swift and 1989, it still sounds good too.