It’s hard to think of a sport more awash in images of blonde blue eyed Californians than surfing. Depiction’s of surfing from Bruce Brown’s “The Endless Summer”, fifty years old this year, trafficked in the idea of white surfers traversing the globe to the astonishment of Asian and African onlookers. The standard had been set by the 1966 classic; films and popular culture followed. Yet as Scott Laderman demonstrates in his recent work Empire in Waves, these images rest on a false narrative, the truth is that white Europeans and Americans appropriated surfing from other cultures and then due to segregation and other forces, cast its image in whiteness.  Others have also questioned the traditional surfing narrative such as documentarian Ted Woods in 2011’s “White Wash.”  The film, in part, explores how African American’s in places like California are recasting the sport’s image and culture. Since the mid-20th century California has been at the center of the sport, so it’s fitting that in Los Angeles a group of African American surfers, men and women, have tried to roll back surfing’s origin story while establishing a new one. In part II of ToM’s celebration of Black History Month, we bring you the history behind surfing and efforts to push back against the racial stereotypes that often under pin it: 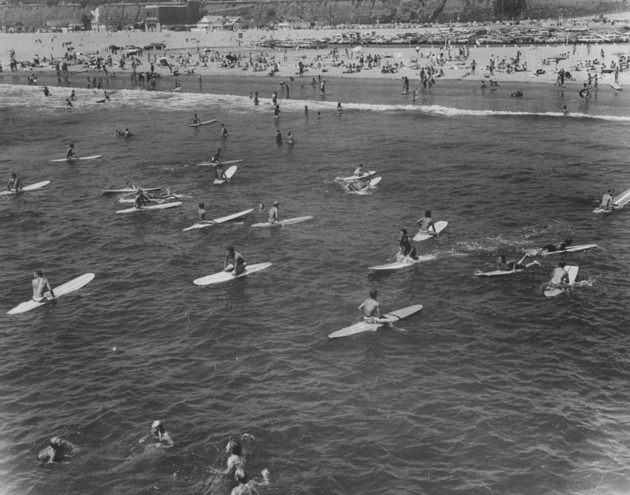 In 1991’s surfing bromance “Point Break,” former Big Ten quarterback and F.B.I. agent Johnny Utah infiltrates a notorious ring of “surfing bank robbers” led by the late great Patrick Swayze’s Bodhi (short for Buddhavista of course). They play beach football, go night surfing, and eventually end their relationship in a confrontation on an Australian beach as 100 foot waves from a fifty year storm crash on the beach. “Point Break’s” ridiculousness has long been acknowledged, from Keanu Reaves performance — “I am an F.B.I. agent!” — to Swayze’s mix of extreme sports and white Eastern mysticism; yet the film, and others like it, also perpetuate a problematic vision of surfing and a form of historical erasure: surfing as a white-only sport. Along with Frankie Avalon movies of the fifties, like “Beach Blanket Bingo,” and more traditional surf films like 1966’s “Endless Summer,” 1994’s “Endless Summer II,” or 2003’s “Step into Liquid,” popular culture has long portrayed the sport as a sort of reservoir of bohemian, if also, in some cases, with a large helping of agro-masculinity and whiteness.

Yet, if one traces surfing back to its beginnings among Native Hawaiians and follow its course to Southern California, you find a much more complicated story that highlights how the sport’s history has been distorted, and that California today serves as a departure point for efforts to re-establish the pastime for the people of color with whom it originated.

“It’s not about some sport thing,” Oceanside’s Patrick “Quashi” Mitchell told documentarians in 2011, “it’s about taking me back to where my ancestors came from and [how] they [got] to where they were.” Founder of Quashi Surfboards International, Mitchell referred to surfing’s origins among people of color in Hawaii, a fact not lost on the slowly growing community of fellow black surfers.