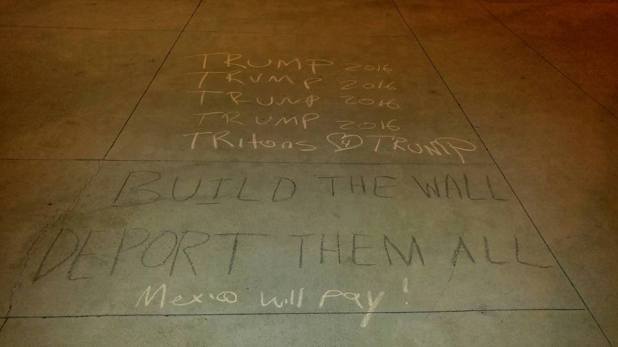 On the morning of Saturday April 9, 2016, members of the University of California San Diego (UCSD) community woke up to the following message drafted by a fellow student:

Last night at approximately 10.00pm, five hooded White male adults were seen writing pro-Trump propaganda as well as violently racist and xenophobic quotes such as “build the wall”, “deport them all”, “fuck Mexicans”, “Mexico will pay”, and “make America great again”. The placing of these chalk quotes and timing means that these five men knew exactly what they were doing: targeting the Chicanx and Latinx community by placing them outside the Raza Resource Centro – partaking in a larger system of violence where Chicanx and Latinx folk are reminded that the United States is heavily invested in White Supremacy. That (as their extremely underrepresented population at UCSD implies) California is not interested in educating Chicanx and Latinx folk, only in exploiting them for underpaid and overworked labor. That should they or a family member be undocumented, they do not deserve the same human rights as documented folk, and should be able to be treated like objects and deported. The placement of the quotes on library walk, the night before Triton Day – the biggest UCSD event of the year – suggests that they wanted these statements of violence to be VISIBLE. They very much understand the importance of Triton Day, and the SPACES Overnight program where over 300 historically underrepresented students are currently visiting the campus, and wanted those students and any visiting Chicanx and Latinx students and families to feel unwelcome at UCSD.

Not only are these actions in violation of the Principles of Community, but they are an act of hateful speech. And in many cases across the United States racist graffiti have been considered a hate crime. Considering the timing and placement of these words, we MUST understand this act of violence as a hate crime also.

As of the weekend, UCSD administrators have fumbled to make half-hearted responses promoting multiculturalism and clarifying that UCSD is committed to catching the bad guys. The most obnoxious one came from the Office for the Prevention of Harassment and Discrimination, which declared the following:

Thank you for submitting a bias incident report. We recognize that many members of the UC San Diego community were offended by the chalked messages.

As a public institution, we value robust debate and public discourse. We recognize that some speech, while controversial or offensive, is protected by the First Amendment of the U.S. Constitution. We are committed to our Principles of Community and we value diverse opinions.

To learn more about the free speech, I encourage you to visit https://students.ucsd.edu/student-life/diversity/expression/

These types of incidents and their subsequent responses are far too common at UCSD. At this point, it may be possible to even say that UCSD is an apologist of hate speech. The most famous racist incident took place in 2010, when on-campus fraternities hosted an off-campus event called the “Compton Cookout,” during which attendees dressed in black face to eat watermelon and fried chicken. The event was featured as the central narrative in the 2014 film, Dear White People.

Little has changed at UCSD since the Compton Cookout. The administration’s main means of deflating the incident were to 1) establish an administrative position titled Vice Chancellor Equity, Diversity, and Inclusion, and 2) open a variety of resource centers (e.g. Black Resource Center, Inter-Tribal Resource Center, Raza Resource Centro) to serve as “safe spaces” for underrepresented students. Neither have succeeded in significantly increasing the enrollment of students from historically underrepresented communities on this campus. Instead, UCSD administration’s model of bureaucratizing diversity is now viewed as a model to de-mobilize student protests calling for racial justice at university campuses nationwide since Fall 2015.

For a public institution, UC San Diego has some of the lowest enrollment numbers of students of color in the country. The demographics for the 2014-15 school year demonstrate the university’s failure to provide the most basic aspect of a commitment to diversity, growth in enrollment of students of color to reflect the state’s population. UCSD’s student population currently consists of 0% Native American students, 1.7% African American students, and 16% Chicanx/Latinx students. These numbers are troubling considering the proportions of these racial groups within the California state population: 1% Native American, 7% African American, and 51% Chicanx/Latinx. In San Diego County, the proportions are as follows: 0.5% Native American, 5% African American, and 32% Chicanx/Latinx. 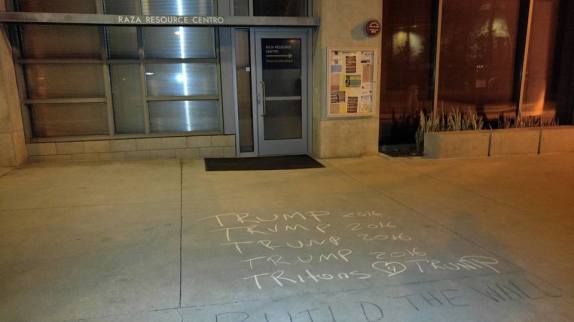 UCSD administration is currently using “diversity” as a means of expanding its power through more bureaucratization. The broader expansion of administrative powers is a trend in public education nationwide. We move forth the analysis that UCSD is in crisis specifically because of its consolidation of decision-making power in the hands of corporate, administrative elites who do not have a background in education, but rather in entrepreneurial management, national security, and other state-sanctioned institutions that profit from the oppression of racialized communities, both domestically and abroad. Instead, decision-making power should be in the hands of those who operate the university: the faculty, staff, and students. The shared governance model of the university implies for that type of structure, but instead of calling for more bureaucracy, students should be calling for the dismantling of it.

One practical solution would be to harvest the contradictions that the California state government and UC bureaucracies have helped sow. Why not demand the state of California to carry out an audit, executed by both students and faculty, to investigate systemic racism on UC campuses? The bureaucracy is a key suspect of this intolerable climate and students must find creative solutions to breaking it down.

This weekend’s incident is not just about Mexicans. Last week, the UC community witnessed a hate crime against anti-Zionist UC Riverside Department of Ethnic Studies faculty and graduate students, shortly after the UC system announced a new policy equating anti-Zionism to anti-Semitism. Muslim students have already been consistently targeted on UC campuses statewide, and this new policy equating the recent calls to end the Israeli military occupation of Palestinian territories with racial hatred only further criminalizes already marginalized communities. Even Donald Trump is shifting between anti-Muslim and anti-Mexican rhetoric.

The racial hierarchy is clearly visible in the unequal distribution of resources throughout the university. The highly neglected and underfunded Humanities and Social Sciences generally house the majority of students of color on this campus. These departments (Ethnic Studies, History, Literature, Visual Arts, Communication, Music) are also given the responsibilities of teaching the administration’s token diversity course requirements and providing the fodder for images of rewarded POC students and faculty to be included on the university’s website or prospective student brochure. Meanwhile, UCSD accepts $2.5 billion annually from the US Department of Defense, a government body committed to the proliferation war materials previously administered by our current UC President, Janet Napolitano.

Thus, UCSD contributes to the development of new policing, surveillance, and war technologies that are used disproportionately to violently oppress communities of color both at home and abroad. As stated in a recently circulated petition signed by 140+ UCSD graduate students of color and their allies, “The growing evidence of the collaborative relationship between the university and the military-industrial complex makes UC faculty and students increasingly call into question the long-term vision of the entire university system.” 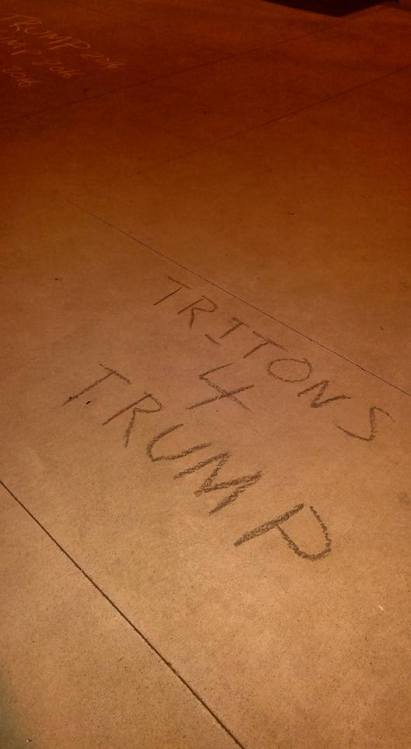 There is no reasoning with the administration. Of course they are going to proclaim that they are sorry for feelings that have been hurt – their veil of respectability will always allow for that because it legitimizes their authority. Feelings are not the problem. The institution remains complicit in reproducing historically-based exclusion from resources by refusing to intervene affirmatively in favor of maintaining a market-logic, which keeps black, brown, and native folks excluded from this space at rates thirty percent of the size of their population in the state of California. Students do not need the university to lend a tissue, nor provide therapy dogs to ease the depression. Administrators could care less about the structural causes of our exclusion and instead want to individualize all of our problems.

If they truly did care, they would be implementing an effective pipeline to recruit students from under-resourced high schools in our region: Southeast San Diego, Chula Vista, Riverside, San Bernardino, Pomona Valley, Coachella Valley, San Gabriel Valley, East LA, South Central, South LA, Oxnard, Pacoima, and so on. Instead, our Chancellor Khosla makes profit off of the wholesale murder and incarceration of black and brown bodies both at home and abroad, whether through his collaboration with DARPA’s drone initiatives or his investment in the private prison system. Everyone is concerned about Trump building a wall, but the wall is already there. In fact, it was expanded and militarized under the leadership of our UC President, Janet Napolitano, who oversaw the largest number of deportations in the history of this country as Secretary of Homeland Security.

Actions like that of Friday night are not frequent occurrences in spaces where black, brown, and native bodies actually inhabit, whether it be San Ysidro or San Bernardino. When white supremacists came out to the streets of Anaheim last month, a community of black, brown, native, and white allies responded by running the bigots out of town. This kind of bigotry is only possible in a place like UC San Diego because students of color are structurally excluded from this geographic space, regardless of our location at the heart of the US-Mexico border region.

We are not minorities. We are minoritized. But the university wants to offer a consolation hug for the behavior of disgruntled racist looney toons instead of putting in place programs that ensure poor, racialized communities, immigrant and non-immigrant, have access to the resources of this university. These incidents can only happen when the university disinvests, year by year, in bringing students of color to the university and providing the resource necessary to thrive.

Seeing “Fuck Mexicans” and “Deport them all” in graffiti across campus does not leave us in pain because the words carry some uniquely enraging bigotry we have never encountered before, nor do we expect to never encounter it again in our lives. It is a sad fact that this is a reality to those of us identifying as Mexican, Mexican-American, Chicanx, and Latinx, due to the settler-colonial foundations and land dispossession upon which this region was founded. These words are painful because they are discursive reproductions of the actual campus environment, one in which the university structure is telling us “Fuck Mexicans” every day by continuing to exclude our communities from the resources that exist within its parameter. The university, being the university, displays a finesse that only exclusive institutions perform so well – one that Trump supporters have not perfected quite yet.

Jael Vizcarra is a Ph.D. student at the University of California San Diego in the Department of Ethnic Studies. Her dissertation research focuses on the 1979 Argentine decree that granted political asylum to 293 Southeast Asian families during Argentina’s military dictatorship. Jael’s dissertation gestures towards a transnational reading of the US-centric and universalizing category of “Asian-American” by elucidating the geopolitical implications of South American racial formations that produce Asians beyond US-based racial logics and categories.

Troy Andreas Araiza Kokinis is PhD student in Latin American History and Teaching Assistant in Sixth College’s Culture, Art, and Technology Writing Program. His dissertation, titled “Anarchism and Armed Struggle in Midcentury Río de la Plata,” investigates the role of anarchist organizations during the Dirty Wars in Argentina and Uruguay. He specifically focuses on the relationship between anarchist groups and populist political movements, such as Peronismo and the Frente Amplio. Other interests include Fascism in Latin America, Spanish and Italian anarchism, Situationism, Chicano art history, Southern California micro­punk scenes, and Morrissey.