All They Will Call You (The University of Arizona Press, 2017) is Tim Z. Hernandez’s attempt at telling the stories of those whose lives were lost in a plane crash in the Los Gatos Canyon, in California’s Central Valley, on January 28, 1948. And telling these stories is needed. Prior to this account the accident and its victims were popularized in the words of Woody Guthrie, who wrote the words to one of the most popular folk songs ever, “Plane Wreck Over Los Gatos (Deportee).”

This response, as needed as it was—Guthrie wrote the poem that would become the song as a way of correcting what he saw as an erasure motivated by racism in newspaper accounts of the accident, most of which declined to name the Mexican passengers—was partial. Guthrie’s response could only imagine the names and the lives of those who died that January morning in 1948. Hernandez, on the other hand, offers a well-wrought story built upon archival research and interviews with those who survived the victims. From these disparate and partial strands Hernandez weaves together a compelling story that leaves the reader knowing, in some fuller way, some of those who died, as well as the conditions that led to their deaths.

Central to Hernandez’s account is this question: how does one recount what has been deemed non-memorable? To understand why Guthrie took such offense to the newspaper stories he read in the days following the crash, and to understand what motivated Hernandez to seek out the stories that would otherwise go untold, it’s necessary to see the plane crash within the social and political context in which it occurred. Never sounding overly didactic, Hernandez sets the scene by describing the back and forth movements of some of those who found themselves aboard that fated plane that day. Hernandez describes this time period as “schizophrenic,” a society operating through an economic system dependent on the simultaneous importation and deportation Mexican labor using trains, boats, and C-47 cargo planes newly rebranded as Douglas DC-3s (post-war). He quotes a government official from the San Joaquin Valley who described the need for dispensable labor (and the twin desire to keep Mexican workers only for so long) as saying: “We are asking for labor only at certain parts of the year, at the peak of our harvest, and the class of labor we want is the kind we can send home when we are through with them.”

There seemed to be, according to researchers of this time and to Hernandez’s own interpretation of the evidence, as much need for imported Mexican labor as there was a desire to rid the nation of Mexican migrants. Had everything worked out as it was supposed to, it is very possible that some if not all of the 28 deportees aboard the plane that day would have, in a matter of days or weeks, been brought back to the U.S. for another stint of work. It was collusion between industry players and federal and state government (on both sides of the border) at its most efficient. A demand for labor—agricultural and industrial—brought Mexican workers (formally, through the bracero program, and informally) by the thousands. When demand waned, the authorities would step in and do the work of sending workers back. Many would return to Mexico as enganchados, that is “on the hook” with a particular farmer or patron, biding their time until it was time to repeat the cycle all over again.

As was true of the thousands of migrants being moved across the border during this era, these 28 migrants were caught between a domestic and international set of policies that could do little to appease the nation’s competing economic needs and its xenophobic impulses. A more humane way of securing labor from Mexico may have prevented this accident—as would have a less racist immigration policy.

Sadly, this plane crash and the lives it took were far from anomalous. By 1945 authorities were using boats, trains, and planes to get the very people they had, six months prior, brought to the U.S., out of the country. The hastiness and seemingly uncaring way in which these removals happened routinely resulted in death. In July 1955, for example, deportees transported by train to the Mexicali desert were left to fend for themselves in 112-degree heat. 88 migrants died of heatstroke. Later, a congressional investigation was ordered to look into the inhumane treatment of those removed from the U.S. via boat. The investigation found that 25 percent of those deported where transported in something akin to an “eighteenth century slave ship” and a “penal hell ship.”

Mass death matters differently depending on whom it happens to, and in the context in which it happens. And where another author might have taken a sentimental approach to remembering those whose presence and deaths are an inconvenient memory, Hernandez manages to capture snippets of lives without making them all into victims of circumstance. Where he can, Hernandez introduces us to people with their own histories, desires, families, and friends. People with hobbies and with vices. Wistful people, and hopeful people. The naïve and the experienced. José Sánchez Valdivia loved baseball, and his life was consumed by baseball as much as it was by toiling in the fields. These were people who worked hard, yes, but who also formed expat ball clubs and competed in what they called “the Mexican League.”

Projects meant to correct the dispassionate and impersonal ways the lives of marginalized people are rendered invisible and unremarkable in both life and death can sometimes lose themselves in the author’s own sense of justice or advocacy. While Hernandez has been vocal about his own personal and political reasons for taking on this project, his book doesn’t suffer from the preachy-ness that sometimes overtakes similar projects. His remains a story through-and-through. It seems clear that maintaining the focus on the story as opposed to the message is what allows for more nuanced insights to emerge. For example, it wasn’t just that newspapers cared so little about these migrants that they just neglected to name them; it’s also that in the official record so little consideration was given to who these people were that some names were misspelled or misgendered. These lazy, dismissive oversights have become part of the official record. Hernandez’s well-researched story, however, recovers a more accurate story. In it María, a female passenger, finally emerges. 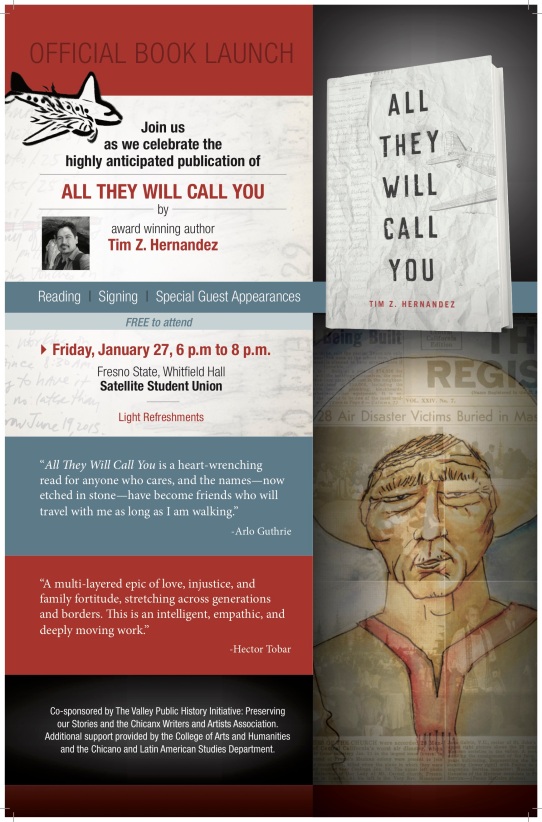 As Hernandez’s book indirectly demonstrates, the official record is often created and maintained not so much to leave an accurate account of what happened, but rather to serve a more convenient memory of how it happened—a memory that is meant to comfort current generations of Americans who may have a vague understanding of our racist and exploitative past, but who don’t really want to know the names, faces, or backstories of this history’s victims. Yet, Hernandez’s project is not one of correcting the record, per se. Rather it offers a competing record, one meant to serve “the people of memory” as opposed to “the people of fact.” Because “officialness too has its inconsistencies.”

All They Will Call You begins with the plane crash as it was witnessed by the members of the small farming community in which it happened. It takes the rest of the book to get the reader into the plane so as to experience the smell of burning rubber, the fear of the passengers, and the “small explosion” that severed the wing from the plane. These are imagined details, of course, but they do double-duty in that they also remind the reader that a general disinterest and dismissiveness towards migrant laborers pervaded this era so that no one saw the need to do a more thorough accounting and remembering of this disaster. Memory, thus, proves to be as susceptible to racism as anything else.

By this time in the novel we’ve met some of these passengers: we know that some were in the U.S. hoping to make enough money to install a well for the ejido back home; we know that another passenger is engaged to be married; we know that a passenger has promised his wife that after this assignment comes retirement. It is at this moment, when the plane lunges to the ground and the names of the passengers scatter across three pages as the bodies of the passengers might have done that day across the sky, that Hernandez’s greatest contribution appears: the sense that all which transpired to put these people on this plane is a shared story. It’s not only the story of 28 Mexican migrants who were being deported and who, without the writings of Guthrie and Hernandez, might have been forgotten. It’s also the story of the crew and of the immigration official. And the story of the economic and political systems that put them all on that plane. And the story of a moment in history where mass death didn’t matter enough to print the names of the deceased, neither in the papers nor in the mass grave in which their remains were interred. In that way, it’s a story that is still being told. It’s a story we all share.

Join the Fresno community for the official book launch of All They Will Call You on Friday, January 27th!

Rubén Casas is an Assistant Professor of English at Fresno State University. He earned a Ph.D. in English with an emphasis in Rhetoric and Composition at the University of Wisconsin-Madison. Dr. Casas researches in/visibility and rhetoric among marginalized people, as well as deliberation, civic participation, and writing in everyday life and contexts. His dissertation, “In/visibility, mobility, and making do in contemporary Latina/o migrant rhetorics,” explores the ways Latina/o migrants, many of whom are undocumented, are able to make a way and place for themselves in the U.S. through nuanced negotiations of visibility and invisibility, and how these result in greater mobility in spite of the many obstacles in their way.