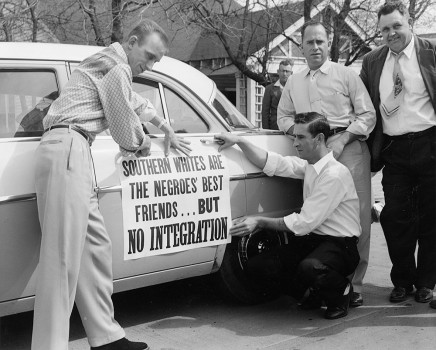 A few weeks ago, we shared the first episode of the new podcast series Doomed to Repeat with a circle of our friends and colleagues–a sort of “soft open.”  But we’re ready to begin rolling out episodes of the first season on a regular basis over the next few months.  We’re hoping to offer conversations with historians and other experts on issues as different as the history of craft beer, the anti-vaccination movement, and the long and fascinating evolution of America’s relationship with Russia.  And we hope to do so in a loose and informal way, with a bit of humor and an eye toward how these histories intersect with the problems facing the world today.

In our first episode, we get to chat with Ansley Erickson, a historian at Columbia University’s Teachers College whose wonderful book Making the Unequal Metropolis: School Desegregation and Its Limits was published last year by the University of Chicago Press.  Ansley has found herself in the headlines lately, thanks to the American Historical Review‘s mind-blowing choice to assign the review of her book to Raymond Wolters, a retired professor with a long history not only as an opponent of desegregation but as a supporter of theories of racial inferiority and white supremacy.  The whole fiasco has outraged historians far and wide, and the AHR has had to apologize.  The story also brought pause to the mind of every scholar who writes book reviews, as well as everyone whose work is reviewed by journals. Who picks the people who cast judgment on your work? Does anyone actually read the review before it gets published?

We welcome the light that this controversy has shed on the spurious “sociobiological” justifications of inequality peddled by Wolters, Charles Murray, and the like.  Yet we worry that it may take away from the deep scholarship and complex, subtle analysis of Making the Unequal Metropolis itself. We hope that the discussion on our show can contribute in some small way to bringing the focus of the conversation back to the problems of racism, class, and structural inequality that the book lays out–the same forces that created segregation in the past and are now recreating it today.

We also interview some guy from Princeton. We think Kevin is adjuncting there for a while or something, so hopefully this guest spot will help him get a better gig.

Doomed to Repeat is hosted by Alex Sayf Cummings and Nicolas Hoffmann, a lecturer at Kennesaw State University and a doctoral candidate at Georgia State University. KJ Shepherd, a soon-to-be PhD at the University of South Florida, recently joined our team as an associate producer.  The podcast is produced in partnership with Tropics of Meta and Dudeletter Podcasting.