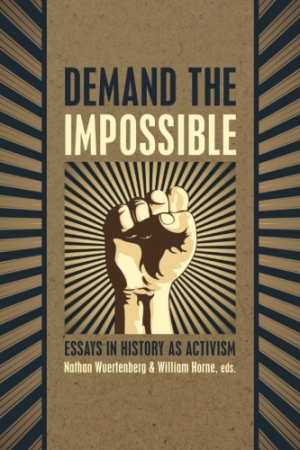 This past April, I attended a local adaptation of En el tiempo de las mariposas (In the Time of the Butterflies) by Dominican writer Julia Alvarez.  It tells the stories of the Mirabales sisters and how they became participants in the emerging movement against American backed dictator Rafael Trujillo.  He was the villain who stood as a spectre over the Dominican Republic for more than 30 years in perpetual power, summarized by the phrase “Dios en el cielo y Trujillo en la tierra” (God in heaven and Trujillo on Earth).  Towards the end of the play, three of the sisters who would ultimately be killed for their activism — Minerva, Patria, and Maria Teresa — face the audience, lift their left fists into the air and exclaim that they are following the legacy of Marti, Che, and Castro, and they yearn for an island liberated from the horrors of the Trujillo regime.

As I read Demand the Impossible: Essays in History as Activism, a series of essays edited by Nathan Wuertenberg and William Horne, I was reminded of Alvarez’s story.  For Wuertenberg and Horne, the Donald Trump presidency is a spectre of sorts for America — but not because President Trump is the progenitor of the racism, sexism, and xenophobia that have become an inherent part of his brand.  More so, the Trump presidency has served as a mirror for American society and history, providing a more honest picture of what America has been, especially for Black Americans and other communities of color.  As Wuertenberg reflects in the second essay, “White nationalism is American nationalism rebranded. Until they [white Americans] realize that, their America will continue to be Trump’s America” (31) — the realization that Trump’s America, one that sought to return to halcyon days of the 1950’s and white supremacy, has always been America.

To proclaim that Trump’s America is not “your America” is to ignore the previous 300 years of colonial and American history that explicitly sought to place white men in power by fostering a sense that the American identity would perpetually be reserved for white men.

This honest engagement with American history, especially the history of race and the place of white Americans at the top of the social hierarchy, is a consistent theme throughout the essays present  in the book.  Kyla Sommers’s essay on the home rule movement of Washington, D.C. tells the story of how fear of majority-black rule undermined the home rule movement in D.C .until the passage of the Home Rule Act of 1973.  Today D.C.’s license plates remind its increasingly white population that it is taxed without rightful representation, but that arrangement was a carefully orchestrated outcome by the white community of D.C. and entrenched segregationists, who worried what would happen to the nation’s capitol under black leadership.  Indeed, the state of D.C. schools and crime became cautionary tales speaking against integration.  As observed by many local activists the ultimate irony lay in the fact that the South, which was never able to capture D.C. during the Civil War held the district hostage after Brown vs. Board of Education.

Similarly, Sarah Sennette’s essay on the the conviction of Pompeyo, a man of color,  for besmirching Don Ferray’s, a white man, honor in 1795 New Orleans explicitly lays out a case in which race is the primary motivating factor for conviction.  Ferray’s public demands that Pompeyo pay his tab after Pompeyo and his friends concluded a night of gambling, in a society where credit was built on the public reputation of the individual, insinuated that Pompeyo was dishonorable and and not to be trusted.  Ferray’s public chastisements of Pompeyo as a man of “many tricks” left Pompeyo with little recourse but to defend his honor before society by striking Ferray. (57)  As noted by Senette, criminality in the nineteenth century was not solely concerned with the individual act committed but with the impact of the act on overall society.  Piracy, for example, was considered a heinous crime and those convicted of piracy were considered hostis humani generis (enemies of all mankind).  Just like men who were outside of all jurisdiction and undermined the sovereignty of nations, the heinousness of Pompeyo’s  actions lay in their potential to undermine the established social order that privileged white men.  Pompeyo’s relationship with a white woman, as a result, became a central element of the case against him.  Dating outside racial groups was an established practice and privilege that was reserved for white men, and Sennette rightly sees Pompeyo’s relationship with Polly Lee as an attack on white manhood generally.

As much as Demand the Impossible uses history as a vehicle to understand a world in which the Trump presidency is a reality, it also tries to understand the contemporary forces that contributed to his victory.  In his introductory essay, Ben Feldman tries to build a more nuanced understanding of Trump’s victory.  Feldman sees a clear connection between recent Democratic election losses and Democrat’s inability to fully embrace the grassroots energy that exists to demand structural and systemic change.

Yes, Trump’s first campaign utterances set the tone for a racist campaign.  Yes, he solidified his sexist and sexual assaulter bonafides on the Billy Bush tape, but he did lay out a vision in which people would compete in an increasingly globalized world and seemingly challenged the pressures exerted on American workers, guaranteed all Americans a “beautiful” healthcare plan, and promised he would make America respected again on the world stage.

Politicians like Nancy Pelosi and Chuck Schumer love to invoke the imagery of resistance and position themselves as elements of the resistance.  Undergirding this “resistance,” however, is a milquetoast politics that does not seek to redefine the relationship between worker and capital, is loathed to embrace universal healthcare, and continues to drag its feet when pushing demands on immigrations.  The lack of Democratic imagination is summed up by the 2018 midterm election slogan: “A Better Deal: Better Jobs, Better Wages, Better Future.”  Feldman is correct when demanding a more proactive political vision akin to Bernie Sanders’s program, which laid out a positive rights framework that saw the government as a guarantor of healthcare, education and employment.  Instead of embracing a proactive vision of government, Hillary Democrats provided band-aid reforms for a corporate system that did not seek to address the interest of workers.  Perhaps this should not have been a surprise, since, as Pelosi articulated in 2017, “We’re capitalists.  That’s just the way it is.” (3)

As we move forward Horne calls for a need to reimagine how we interact with labor as a process to create wealth, especially as automation and emerging sources of energy continue to displace workers. Through stories of formerly enslaved laborers in the 1930’s Horne is able to highlight the challenges faced by workers encountering a world that embraces mechanization.  As the world embraced the washing machine, many domestic workers were displaced from work as wealthy, and oftentimes white, families no longer needed to retain black servants.  It is painful to read the stories of individuals, like Isom Roberts, so ravaged by mechanization to yearn the days of slavery because of the modicum of security it provided.  Roberts was not in any illusion that slavery was not the worst thing to have ever happened to Black Americans, but it does speak to the pain and uncertainty faced by a man relegated to the peripheries of the economy and facing incredible levels of insecurity.    As the washing-machine industry developed, the jobs for creating these machines did not go to the displaced domestic workers who were overwhelmingly black, but to mostly white men who were able to cash in the social currency afforded to them.  Black workers and the poor undoubtedly continued to be on the receiving end of derision by an American society guided by codified racial and class stereotypes.

The most difficult challenge for Demand the Impossible may lie in its attempts to place how white Americans engage with race as a central feature of what it means to build a progressive movement.  The generally accepted narrative of Trump’s election is seemingly benign in its engagement with the question of race.  For many Trump supporters, he was elected as a champion of the “forgotten man.”  A wealthy, Ivy-educated elite (he went to Wharton, remember!) was able to build a connection with working-class white Americans in the economically depressed cities of America.  He was able to lay out a vision that spoke to the nostalgia of workers for a time in which success and financial security were expectations and not a cause of anxiety.  In the background, however, we cannot ignore the angst that is felt by white Americans in a country with shifting demographics, perhaps most aptly represented by the election of a black president.  Donald Trump did not ascend to the presidency solely on the backs of maligned Appalachian workers with depressed job opportunities.  He was also elected by suburban white families outside major metropolitan areas.  In fact, the average salary of the Trump voter was higher than that of the Democratic voter.  In the zero-sum vision espoused by Trump, many of these white voters made the decision that they would rather be winners than losers.

It is the simple fact that people do not want to accept a world view in which they are complicit in a manifestation of something that society categorically acknowledged as verboten.  The fact that racism or discrimination is taboo forces people, in their quest to be good, to disassociate themselves from any notions that they could participants in such a world.  For Wuertenberg, this manifested itself in the hashtag “notallwhitepeople” in response to the national anthem protests.

And Wuertenberg is scathing in his critique of white Americans failing to embrace larger systemic change initiatives claiming that “white fragility enables the restriction of social progress” (31).   For example, in a world that believes itself to have achieved labor justice but racism continues as a mainstay, how will we explain the continuing racial gaps in employment and salary?  Derision, ostracism, and systemic oppression have been the typical American responses, and they continue to be.

There is a lot to take away from Demand the Impossible, and perhaps the biggest flaw of the book lies in the incredibly daring challenge taken on by the editors.  It is laudable for the editors and the many scholars who wrote the essays to proactively use history as a tool to affect some type of beneficial change.  As the foreword lays out, if historians are indeed “humanists” it is incumbent upon them to help use their craft to better the world.  Apart from a select few essays, however, we do not have a sense of the many activists and groups currently working on the many issues highlighted in the book. There are dozens of local community group working on many of the issues highlighted in this compilation and pushing the bounds on traditional organizing by embracing an explicit racial justice lens as they do their work.  The editors and authors would do well to sit down with many of these activists who are actually trying to demand the impossible.

Melqui Fernandez was born in the Dominican Republic, grew up in Brooklyn, New York, and graduated from Columbia University with a degree in nineteenth-century American history. He worked as a community organizer in Virginia focusing on immigrant rights and criminal justice reform.  In the future he might be a lawyer to placate his immigrant parents.