I have been thinking a lot about the hashtag #LoveWins in response to the historic ruling by our US Supreme Court on Friday. This comes from a self-admitted romantic, one who really hopes that, when it comes to my own personal life, love will somehow find a way to win. And while I find myself completely in touch with the sympathetic side of this judicial decision— for all of my male friends who love other men, and all my female friends who love other women, for their struggles with discrimination, dirty looks, and unfair treatment, and for their families and friends also affected— I don’t think we should detract from the gritty ramifications and significance of this decision.

And so, let me put on my ancient history hat and pontificate for just a second on why this is really such a landmark ruling, and why, even if you identify as conservative, you should still feel positive about this decision.

For most of human history, marriage has not been about love. It has been about social connection, economic stabilization, political alliance, security, and personal and familial advancement. Moreover, because of such “advantages” that came with marriage, the state has always taken an interest in who married whom. Long before Mohammed existed, definitely before Christianity was considered rebellious, and way before Judaism or monotheism more generally was conceivable, the state was very much involved in deciding who had access to marriage and, beyond that, the legal obligations and rights that came with it. In some ways, the joining of two people into a unit officially recognized by the state is one of the earliest and most basic institutions that has ever existed. 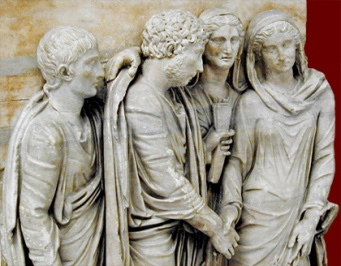 When we ancient historians talk about state formation and early states, one of the first things that comes up (or at least ought to come up) is the issue of marriage. Intermarriage between different tribes, then different ethnic groups, then different cities, is one of the transformative processes that marks the emergence of a state. And when we look back at that process, the question of marrying for “love” doesn’t exist. The Greek writer Thucydides tells us about how an indigenous group living in Sicily decided that they needed to go to war for the sake of protecting their rights of intermarriage with one of the nearby Greek colonies. We don’t know the precise circumstances of why this was such a big deal, but “love” was almost certainly not among them. Similarly, before the Romans had basically taken over the world yet after they decided that being confined to a city on the Tiber was less than ideal, they negotiated different statuses of citizenship with individual rival cities and allies; one of the key topics on the table? Yep, you guessed it: marriage rights. We could follow this template down into the medieval period and beyond, looking at its manifestation in places as far-ranging as the England of the mythical King Arthur to shogun Japan. In what I would venture to say is a near-universal truth, if you have states, those states are going to have vested interests in controlling marriage according to what most benefits the state, not what benefits either couples or the love two individuals might have for each other.

And that leads me to why this most current court decision is so crucial for how we understand the state of our states, or, better, our wonderful yet often dysfunctional union of 50 states. Marriage, as an institution, offers a stream of benefits for those people who choose to enter into it, be their union condoned by a particular religious viewpoint or not. Marriage (or civil unions when they are recognized as the exact equivalent of “marriage”) allows for next-of-kin procedure in situations of medical emergency, for immediate inheritance of income and the uncomplicated inheritance of state-sponsored 401k packages upon the death of a spouse, for the option of state-sponsored benefits and insurance coverage for spouses, for equal guardianship of children (and the less nice-to-think-about but also equivalent issue of custody in the context of divorce), for fair entitlement in contexts of separation and divorce, but also for recognition by law, for fair tax treatment, and for probably myriad other reasons that people far more qualified than me can talk about.

The point is: none of these entitlements or rights have anything to do with the issue of love. In theory, two people can hate each other, but can decide that they mutually want these benefits, and there is nothing in the law that prevents them from getting married. As of yesterday, the only thing that really did prevent them was a) whether they lived in a state that chose to make their sexual orientation a criterion for getting married or b) whether they were citizens (which is a whole other issue that I am most certainly not going to get into right now).

This Supreme Court decision came about because one husband in a gay partnership died from Lou Gehrig’s disease, technically referred to as ALS, from which a number of notable individuals have suffered: Lou Gehrig, “Sesame Street” creator Jon Stone, professional boxer Ezzard Charles, NBA player George Yardley, jazz musician Charles Mingus, US Vice President Henry A. Wallace, Army General Maxwell Taylor, NFL players Steve Gleason and Tim Shaw, and physicist Stephen Hawking. The couple decided to get married because of the legal issues associated with medical access and DNR decisions, and flew to Baltimore to have the ceremony recognized legally because their home state—Ohio— wouldn’t allow gay marriage. They filed for an injunction in Ohio so that the living spouse would have the opportunity to be listed as “surviving spouse” on a death certificate (for the record, these two had maybe the least romantic honeymoon period ever), the district court decided in their favor, but then the state of Ohio itself filed a lawsuit appeal to the Sixth Circuit Court of Appeals and won, thereby opening the possibility that a death certificate could be reissued without the mention of a surviving spouse.

Let’s all let that sink in for a second. All of this was due to the fact that the representatives of a state didn’t want to let a man have his name listed as “surviving spouse” on the certificate of death of another man. The Supreme Court outcome is really just an epilogue: the legality of the first death certificate, initially acquired by special injunction from the state of Ohio, was upheld by the Supreme Court of the United States.

I don’t know what all of this means. I feel joy for all of my gay friends who, if they feel compelled to get married, have the ability to do so without a ton of legal holdup at this stage. I also feel sad for them because, as heterosexual couples who have been going through for a very long time will likely concur, with #LoveWins come #LoveLosses. I selfishly hope that it’s not just us heterosexuals who hold the patent on making bad decisions about love and commitment; otherwise I will soon have an overwhelming amount of jealousy of all of my gay friends. This is a day for celebrating equal treatment by the law, and equal recognition by the state. My less cynical self really does hope that love will always win, even if it’s somewhere in the clouds and rainbows. Here on earth, though, the best we can hope for is that justice will win. And in this case, I think, our hopes have not gone unfulfilled.

Lela Urquhart is an assistant professor of History at Georgia State University and an archaeologist of the ancient Mediterranean world. Her research focuses primarily on ancient colonization in the west Mediterranean, and particularly on the relationship between religious change and state formation among both ‘indigenous’ and ‘colonial’ societies in Sicily, southern Italy, and Sardinia.  She has published articles in the American Journal of Archaeology and the Journal of the History of Ideas and is completing two monographs: Measuring the Impact of Colonization: Colonial Religion and Indigenous Society in Archaic Sicily and Sardinia (E.J. Brill) and Colonization, Religion and State Formation in the Ancient West Mediterranean (Oxford).