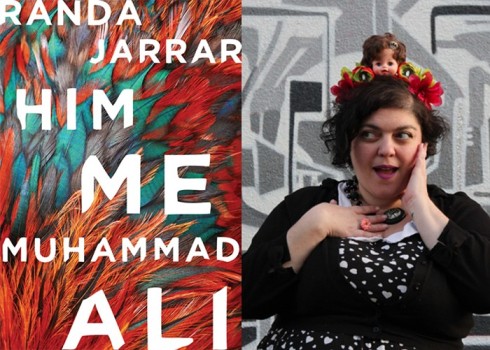 Despite being a slim volume, Randa Jarrar’s remarkable collection, Him, Me, Muhammad Ali, manages to take readers on a world tour of unlikely places: the shabby apartments of an Egyptian beach town, the mean streets of Yonkers, the tony Seattle home of a celebrity feminist academic.  Jarrar, who teaches creative writing at Fresno State, offers readers a dazzling array of perspectives and voices, at turns slangy and foul-mouthed and bittersweet and lyrical.  Throughout it all, though, Jarrar ties together her short stories with the thread of an Arab and Arab-American experience that is diverse and varied yet utterly distinctive. Her voice may change from story to story, but it remains frank, funny, and poignant throughout.

Jarrar is perhaps aware of her unspoken mission: to detonate stereotypes about Arab and/or Muslim life, and to shed light on the stories of people so ignored or little understood that caricatures or conventional wisdom about them might not even exist in the broader American consciousness.  In “Lost in Freakin’ Yonkers,” we find our narrator, a young Muslim woman, knocked up by her dopey boyfriend just as she’s making her way through the first year of college.  Her parents are none too pleased. (“Ass. You big, stupid ass. I knew I should’ve had your pussy sewn up the last time we were in Egypt,” her mother cries, dangerously overreacting to the news while barreling down I-95.)

When it comes to Muslim women, Americans may prefer hortatory sob stories of oppression, women in burqas nobly straining under the weight of patriarchal authority—Not Without My Daughter meets Lifetime movie by way of Malala—but they will not find that in Jarrar’s work. She does directly engage, nonetheless, with the thorny problems of negotiating class, gender, and sexuality in the immigrant experience.  The author deftly navigates these criss-crossing commitments and awkward intersections, as in “Building Girls,” the story of a working-class Egyptian young woman who toils away for her parents in a building that caters to more affluent tourists; her childhood friend, the daughter of a family who used to vacation there, goes to the United States and gets a PhD, living a drastically different life than her own.  There is an aching recognition of different life trajectories, as well as the renewal of old friendship that can transcend them.

In another story, the narrator is an ambitious young writer who works as an assistant for a widely feted Egyptian academic in Seattle, who learns to see the vanity and hollowness behind the celebrated intellectual exterior. (This story, in fact, reminded me a bit of a wonderful story by our very own Carribean Fragoza called “Rush”—perhaps there is a whole literature of young writers toiling for elders with higher status and social capital, and foibles of their own.)  Throughout Jarrar’s work, there is not only the candor expressed by a wide range of female protagonists, but also a subtle awareness of the many gradations of class and status that shape the experience of ballerinas, servants, aspiring writers, pregnant college students, and angry immigrant parents. The central axis of conflict in these stories is never Islam and secularism or (Middle) East and West but the struggles of women and girls in a myriad of distinct, memorable local contexts, trying to sort out how to be who they are supposed and who they want to be.  Along the way, there are plenty of doses of loopy humor and whimsy that bring to mind the stories of the Israeli writer Etgar Keret.

The only story that stuck in my craw a bit, in fact, was the first, “The Lunatics’ Eclipse,” which has a touch too much of lyrical magical realism for my taste.  But it certainly works as a fable in its own right.  The stories in Him, Me, Muhammad Ali introduce readers to a series of unforgettable characters and shows a writer in command of a versatile set of talents.  It is a welcome contribution to Arab-American literature and a window into a changing American (and often transnational) experience.  If only the authors of works such as Hillbilly Elegy could bring the compassion, imagination, and depth of insight into telling the stories of their own communities, we might have a better chance of understanding where America is at in 2017.

Randa Jarrar will be speaking on several panels as part of this year’s (2017) LitHop festival in Fresno. As a media partner, Tropics of Meta is collaborating with LitHop to highlight important conversations, foster dialogue, and feature the writings of participating authors.
Possible posts included, but are not limited to
-chapbook/book reviews
-author profiles
-Q & A with panelists
-excerpts
-reflections
We’re looking forward to hearing from you.  If you are interested in contributing, please email us at tropicsofmeta@gmail.com.