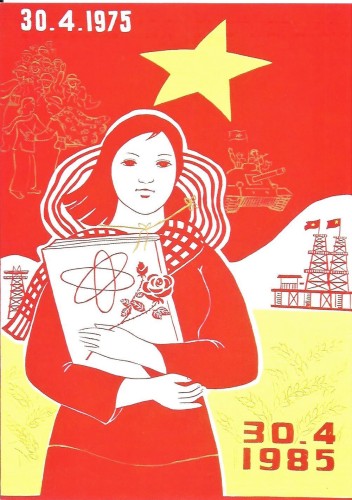 My interest in Vietnam stems from various sources. I grew up watching the Vietnam War in my living room with toy soldiers scattered about – old enough to wonder how the enemy could withstand such a disproportionate number of casualties, but too young to reap the benefits of the Summer of Love.  Fifty years later, family members and friends are vacationing in Vietnam (my daughter brought me postcards from her trip there, which I use to take reading notes), a trend in travel which I find both strange and hopeful. Strange because the war claimed 3 million lives, including those of 58,000 Americans, and hopeful because of the Vietnamese people’s capacity to forgive. Moreover, Ken Burns and Lynn Novick are releasing their 18-hour, ten-part documentary The Vietnam War on September 17, 2017, which includes interviews with Neil Sheehan, who wrote the Pulitzer Prize-winning A Bright Shining Lie: John Paul Vann and America in Vietnam (1988), a tome I just finished reading.

Sheehan’s book begins with the funeral of John Paul Vann at Arlington National Cemetery.  Sheehan uses Vann’s career to give us a handle on the wide, sweeping history of Vietnam. The book is broad in scope, beginning with the end of World War II, through the defeat of the French at Dien Bien Phu in 1954, past President Lyndon Johnson’s escalation of the war, and finally to “Vietnamization” and the fall of Saigon in 1975. Although hardly a household name, Vann indirectly influenced both the military and civilian policymakers for almost a decade.

Vann was born in Norfolk, Virginia in 1924. His mother, Myrtle, never married his birth father but eventually young John took the last name of the man she did marry, Frank Vann, who raised him along his two brothers and sister. The family was poor even by Depression standards; Myrtle earned a living as a prostitute “specializing in middle-class men who would have been embarrassed to be going to a brothel,” and spent her earnings on her appearance rather than food for the family. (Vann’s younger brother suffered from rickets, a result of a vitamin-deficient diet.)

Despite this squalid upbringing, the driven Vann caught the eye of a wealthy benefactor who financed his education at a small prep school in the Blue Ridge Mountain foothills in 1939. After graduation, he entered the Army Air Force, but World War II ended before he saw action. After distinguishing himself in Korea and in post-war Germany, Vann ended up as an American advisor to the South Vietnamese in 1962 (pre-escalation).  Stationed in a rural sector west of Saigon, Vann soon recognized that the Vietnam War was mostly a nation’s struggle for independence rather than an opportunity for spreading communism. He recognized the differences of the Viet Cong guerillas and the communists who infiltrated from the North. Before Vann’s death in a 1972 helicopter crash, his reports and observations influenced then-President Richard Nixon’s Vietnamization strategy for ending American involvement.

There are many fascinating, unexpected aspects that reward the persistent reader of this book. One is Sheehan’s own admission that beginning in World War II, journalists historically gave the military a pass. They would accept their version of the events, and Sheehan acquiesced as a young UPI and New York Times correspondent, at least at first. But Vann confided in journalists like Sheehan and David Halberstam that they should be asking more probing questions challenging America’s military strategy, even though such openness had a negative impact on Vann’s career. While Vann was brave and noble in some ways, the ambitious lieutenant colonel was no saint, especially in his harsh treatment of women, including his own long-suffering wife Mary Ann.  He was as complex as the war itself and his life story is a major part of A Bright Shining Lie.

What makes the book so relevant today is that it reminds us of the role of serious journalism in questioning the policies of Presidents, high-level government officials, and military leaders. One interesting sidebar is the story of Daniel Ellsberg who leaked part of the voluminous Pentagon Papers in 1971, which revealed that former Secretary of Defense Robert McNamara’s political strategy had been “a campaign of public relations and diplomacy unrelated to political and social conditions in South Vietnam.”  Ellsberg’s first job out of Harvard was planning nuclear strategies against China and the Soviet Union for the Rand Corporation, and he later volunteered to serve on the ground in Vietnam. In his the first few years there he was a zealot in the belief of American involvement, but then he became more disillusioned. So when Ellsberg returned stateside and the opportunity presented itself, at the risk of imprisonment, he photocopied the incriminating documents and gave them to The New York Times.  Another interesting irony was that the papers where compiled under the direction of Secretary McNamara, who felt compelled to document the policies of the war as accurately as possible.Eventually, McNamara resigned as Secretary of Defense when he realized that the war could not be won and later was haunted by the realization that he had been complicit in the destruction of a country and the waste of lives.

The Sheehan book encourages one to believe that once lies are exposed, there are consequences and real change can happen.  This lesson may be hopeful for our current political situation and the ongoing wars in Iraq and Afghanistan.  People can wake up, but in what time frame? Perhaps in a few decades there will even be resorts opening in Kabul with vacationers flocking to them.

Murray Browne lives and writes in Decatur, Georgia. His latest book Down and Outbound: A Mass Transit Satire is available on Amazon.

Writer, Bookseller, Small-time publisher, Blogger. Author of Down & Outbound: A Mass Transit Satire (2017) and The Book Shopper: A Life in Review (2009). My website which links to my three blogs is at murray-browne.com View all posts by Murray Browne