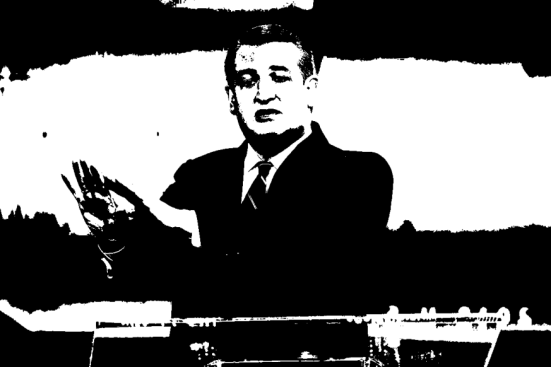 Ted Cruz does not have the kind of personality that puts people at ease. Successful politicians must first and foremost be likable, not inspire Zodiac Killer memes. Nevertheless Cruz stands at the height of national politics.

The keys to Cruz’s combination of effectiveness and creepiness can be found in his time as a college debater. I have insight into this obscure world, where I competed for four years for a much less vainglorious university than Princeton. When I read an article in the New York Times in 2015 by Jason Horowitz about Cruz’s time on the debate circuit I suddenly realized why I found his uncanny affect and florid rhetorical style so eerily familiar.

There are many different debate formats, and both Cruz and I competed in parliamentary style (at the same tournament once, even). In “parly” teams debate a resolution provided only 15 minutes before the round begins. Debaters thus must be nimble, resourceful, and able to access personal knowledge in the absence of ready evidence. Such skills translate well to the world of politics.

The emphasis on persuasion over evidence can obviously lead to chicanery.  I once witnessed a team win a crucial round by saying that hospice care involves forced lobotomies. If a debater says something exaggerated or untruthful, but keeps hammering at it with absolute conviction, that person will go far. If their opponents spend all of their speaking time disputing the facts, they have de facto put themselves on the defensive, the surest way to lose a debate round.

Cruz obviously learned these dark arts well. For example, he has had the audacity to claim he had nothing to do with a government shutdown he clearly instigated back in 2013. Or just look at his recent debate with Beto O’Rourke, where he claimed without a quiver of doubt that Martin Luther King would somehow be opposed to black athletes protesting against police brutality during the national anthem.

Beyond his dissembling, Cruz’s manner of speaking is unsettling because he is still arguing to a debate judge. Debate judges tend to be debate coaches or debaters who must be persuaded according to the game’s unwritten rules. Those judges only consider arguments made in the round, not their own common sense. They write down every argument made, meaning that “dropping” an opponent’s argument can lose a round. This encourages a shotgun approach where debaters blast opponents with too many arguments to answer. One way to deflect this strategy is to keep changing the subject when pressed, a strategy I have witnessed Cruz use more than once. In any case, this is not a way that normal people argue, and debaters who have been trained in the rules of the game like Cruz have a hard time breaking the habit.

Cruz’s oddest rhetorical tics are also familiar from my college debate days. Debaters commonly pepper their speeches with pop cultural references to add levity and charm judges. Since we were huge nerds judged by huge nerds, the references could be obscure or maladroit. Cruz can’t help himself from making such allusions. Take, for instance, his assertion that the Republicans were like Bart, Homer, Marge, and Maggie Simpson, and the Democrats were like Lisa. I laughed when I heard this because it sounded like something straight out of a 1990s debate round, right down to the fact that The Simpsons is among that decade’s biggest cultural touchstones. (His statement about Beto O’Rourke bringing “tofu, silicone, and dyed hair” to Texas was just plain weird, though.)

Even Cruz’s campaign ad featuring a “humorous” song putting down Beto O’Rourke because of his name makes sense as a college debate strategy. The parliamentary debate format tried to mimic aspects of debate in English Parliament, including witty put-downs of one’s opponent. If the jokes landed, judges would accept mockery of opponents. This is an aspect of college debate that tripped Cruz up, and he still seems to have a hard time sticking the punch line. Just recall his characterization of O’Rourke as a “Triple Meat Whataburger Liberal.”

However, O’Rourke ought to be prepared for someone who can bend the facts with absolute conviction, distract with shotgun blasts of rhetoric, and change the subject whenever caught in a tight spot. Cruz’s time as a college debater may have made it difficult for him to talk like a normal human being, but it also gave him powerful abilities that other politicians crave. Based on the first debate, it seems that Beto figured out how to keep from getting distracted and kept pushing his message forward.

On the debate circuit we used to joke about people we called “lifers.” They loved debate so much, they just couldn’t give it up after graduation, so they became coaches or perennial judges. In the case of one such lifer we used to joke with him by tapping our arms like heroin user preparing a vein for an injection. Their lust for debate was as intense as a drug addict’s need for junk, a compulsion rather than a choice. Sometimes these debaters, like Cruz, would come back and compete at the Worlds tournament while they were in law school. (That was the tournament at Princeton, in 1995, where I also competed.)

It is obvious that Cruz is a lifer in his own way, but instead of judging rounds he is continuing to compete by other means in the political realm. The same arcane approach that makes him so off-putting is paradoxically the key to his success, and one key to understanding how to defeat him.